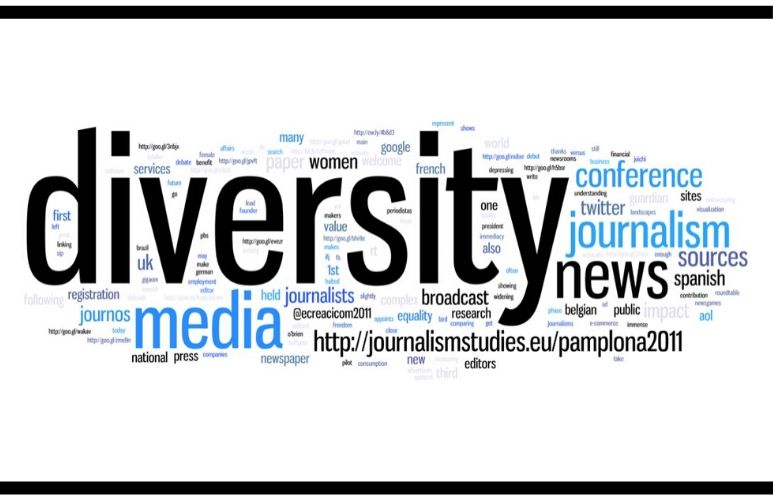 In this day and age, media outlets are frantically trying to navigate the digital transformation—the pivot to video, the shift to third party platforms, and in some cases the end of print media altogether. However, as they navigate the challenges of the digital transformation— disruption to the means of distribution and monetisation of news content—many are forgetting a key way to broaden and deepen relationships with their audiences: diversity.

Diversity is not just what is covered, but how it is covered. Creating quality, nuanced journalism about subjects ranging from race to gender, disability to socio-economic class, to all other sorts of identities and experiences requires a diverse range of backgrounds and life experiences in the newsroom, according to Alexandra Borchardt, one of the authors of a recent study on media diversity.

“In digital transformation, you have to approach a variety of diverse audiences,” says Borchardt. “You will only be able to do that when you have an inclusive and diverse newsroom and ways to really approach these diverse audiences,” she continues, adding that diversity is a competitive advantage to any newsroom as it automatically expands the scope and reach of a given news outlet.

There is no time like the present to change old habits. According to Borchardt, journalism is facing a talent challenge—particularly due to the job instability that has come as a result of (especially local) news organisations struggling, and the debates over trust in journalism leading to the increased online harassment of journalists.

“For many young people, role models are really missing because they don’t come across journalism as much as they used to because they consume their news in very different ways,” she continues, introducing one of the core themes of the digital transformation.

“Commitment from the top is essential, but you have to open up spaces within the newsroom to really target different audiences with different platforms,” she continues. With audiences having more options in terms of what news they chose to consume than ever before news organisations need to be able to cater to the interests of diverse audiences, or they will simply look elsewhere.

“That is what digital transformation it’s really about.”

Borchardt’s comparative study, published by the European Federation of Journalists, found similar diversity challenges between Germany, Sweden and the United Kingdom with each country having its own unique dynamics.

In the UK, social class was a major issue, with most journalists graduating from elite universities and fewer pathways available into the profession for those with working class backgrounds. Many, including the head of Sky News, argue that a scarcity of journalists from areas of the UK that are struggling economically contributed to many news media not understanding or foreseeing important political stories, such as the the UK’s vote to leave the European Union in 2016. Sheffield Hallam University’s Carmel O’Toole was one of many who wrote in 2017 that the failure of media hold local government bodies accountable about unsafe tower blocks housing poor people – many whom were not White, or not British – contributed to the Grenfell fire that killed 72 people. Channel 4 presenter, Jon Snow used his MacTaggart lecture in 2017 to say that reporting on Grenfell tragedy made him feel “on the wrong side” of Britain’s social divide warning the media had become too far removed from the lives of ordinary people.

However, on other measures of diversity, the United Kingdom is ahead of the curb, according to Borchardt: women edit one in three national newspapers. This is far ahead of Germany that is struggling to improve gender diversity. Meanwhile, Sweden struggles with racial diversity in its newsrooms, as it has been a largely homogeneous country until relatively recently. These issues was written about in detail by Arne König in 2017:

One major problem is that they are not as connected with migrants and the migrant community as perhaps they should be. Half of the total members of the Swedish Union of Journalists live in the capital, Stockholm. They are normally well educated, live in the city, not in the suburban areas with many immigrants. Many journalists for production reasons tend to leave the newsroom only if really necessary. Their work is done by telephone and with the help of the internet, they do not often meet the world of the migrants, or other underprivileged groups. For a long time the media has been dominated by white people and journalists only had Swedish experiences and backgrounds. Slowly this is changing, especially in public service media, where second generation migrant staff are now more present and more journalists with migrant backgrounds are entering the profession.

Borchardt say that more studies needed are needed to explore these cultural nuances. If we do not address the lack of diversity in newsrooms, we won’t see a change in either the journalism that is produced, or the audiences that are reached as a result of this change. Ignoring these audiences, means ignoring people who might be critical to having the traffic or paying members and subscribers that they need to survive in the brave new digital era.

“As long as you don’t change the culture, the system, decision making structures, hierarchies, the way topics are brought forward, the way things are discussed, the way you approach your audiences with different platforms, it’s really hard to get a diversity of outcomes in terms of content,” she writes.

So when does diversity of staff tip over into changes in newsroom culture? While it is difficult to quantify it, Borchardt estimates, for example, that when a third of the workforce are women, it is much more likely they will speak up rather than just adjusting to the norms and standards that are prevalent in the newsroom—an observation that might translate to other minority groups as well.

The study quotes some examples of how greater diversity creates the environment for better journalism, including about the BBC’s 50:50 project, where 74 percent of all participating news teams met the goal of having equal representation of men and women on their programmes within one year. But Borchardt’s favourite example of this kind of representation leading to better journalism is the 2019 Financial Times story about the widespread abuse of hostesses at a charity dinner.

Borchardt, who worked at the FT Deutschland 20 years ago said that the story, which became the FT’s highest viewed article of all time, was “only possible because now there are so many women” in the FT newsroom—it went on to be the most viewed story in the paper’s history.

As part of the project, Borchardt, drafted ten recommendations for newsrooms to be more diverse, identify talent and more accurately reflect the society they are reporting about. Many, such as commitment from the top and recruitment strategies have been touted many times. Others, such as warning against playing different aspects of diversity against each other offered fresh food for thought on what it means to be a truly diverse newsroom.

Another pointed out the need to monitor diverse content, as having a diverse staff does not necessarily mean that the content will automatically reflect diversity—and attract a diverse audience that sees themselves reflected, which is the ultimate goal.

“It is important to keep emphasizing the importance of diversity and inclusion in the newsroom continuously, because it is still not a priority in many European newsrooms,” says Zoë Papaikonomou, a Dutch journalist and co-author of the book “Got An Angry Muslim For Me?” alongside Annebregt Dijkman. The book examines the tracks and pitfalls of working as a bi-cultural journalist in the Netherlands.

“In the Netherlands we still see a focus on ‘on air’ diversity, something which Annebregt and I call ‘diversity in appearance’ (schijndiversiteit),” she continued. “Newsrooms want to seem diverse from the outside, but on the inside they are as homogenous as ever. In representation and ways of working.”

For Papaikonomou, thinking long term, in order to become more diverse and inclusive, is opposite to the way many journalists are used to working and also the attitudes of many senior leaders. It takes more thought and care than simply filling the paper; it is a cultural and organisational shift that wont necessarily happen overnight, but needs to be cultivated for the years to come.