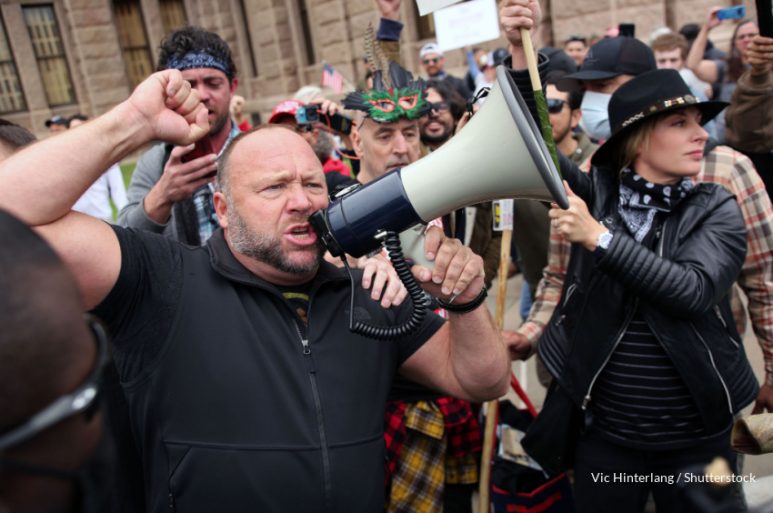 When does promoting a conspiracy theory cross the line? Alex Jones, a well-known American conspiracy theorist, was ordered by a Texas jury in August 2022 to compensate the parents of a child killed in Sandy Hook in 2012. A Connecticut court found Jones liable for defamation in 2016 for portraying the massacre as a hoax involving actors to increase gun control. On his show, Jones relentlessly attacked Sandy Hook parents. Many of those parents admitted to having to move from their homes multiple times because of the level of harassment they received from Jones’s supporters. His latest punishment, due to a defamation case, is to fork over $45.2 million in punitive damages.

Such outlandish claims are not Jones’s first. He pushed conspiracy narratives that black people were violently targeting whites shortly after the murder of George Floyd. He has also denied being racist. In an interview with his co-host, Owen Shroyer, the Floyd circus was called “a total hoax of police brutality that led to riots and protests.” He claims that the media, leftists, and Black Lives Matter are trying to control humanity with George Soros’s funding. 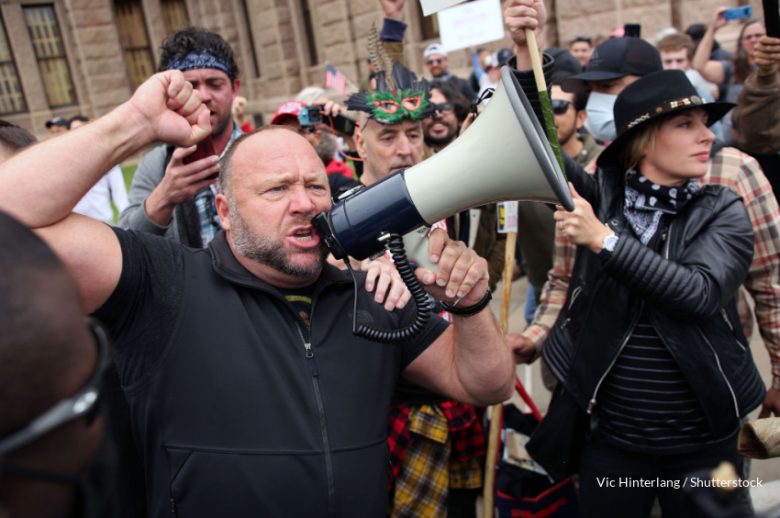 Conspiracy theorists and people who spread fake news often aim at people of color to promote their baseless claims. Donald Trump stoked the fires of former president Barack Obama’s “bither” claims in 2011. Roger Stone, Trump’s former longtime associate, was quoted as saying in an interview with PBS’s Frontline in 2016, that, “Trump understands among Republicans there’s a very substantial majority who have questions about Obama’s origins, how he suddenly became a national figure, and whether he was qualified for the presidency.” Several other questions also surrounded Obama’s religious background during his presidency.

What role does racism play in these conspiracy theories and fake news stories? What is the significance of Alex Jones’ defamation trials? Christina Greer, author of Black Ethics: Race, Immigration, and the Pursuit of the American Dream says, “Jones is able to mobilize his audience based on fears.” “A number of these fears were expressed explicitly by white Americans about the future of their country, who’s in it, who’s controlling it, and where they fit within it,” as Greer explained, “Some, many, many, based on their ignorance.” In 2017, Jones continued pushing the race card by saying, “reparations are appropriate for white people and not for black people whose ancestors were slaves.”

In her book, The Second Coming of the KKK, Linda Gordon found that white populism, conspiracy theories, fake news, skepticism of science, and hostility toward Jews, immigrants, and racial minorities fueled the rebirth of the Ku Klux Klan during the 1920s. Over that decade, mainstream Americans were as enamored with hooded and cloaked white supremacists as they were with Fourth of July picnics. The newer version of the Klan used a different strategy to recruitment by building a prestigious public image crafted by a public relations firm. Aside from advertising in the media, the KKK sponsored sports teams and fraternities, held pageants, and paid 40 percent commissions to its many recruiters. As opposed to the first Klan, which was formed in response to emancipation and Reconstruction, the second Klan was sparked by the 1915 film, “Birth of a Nation,” which portrayed Klansmen as noble warriors protecting the sanctity of white women from purportedly lustful black men. President Woodrow Wilson highly praised the film during a screening at the White House, describing it as “writing history with lightning.” Wilson said, “My only regret is that it is all so terribly true.”

Facebook, Spotify, Apple, and YouTube banned Alex Jones in 2018, but the Infowars homepage still brought in ten million visitors every month, according to Vox. According to Vox, his conspiracy theories range from comical to dangerous. In addition to regular antisemitic and Islamophobic remarks, Jones has also been a vital proponent of the Pizzagate conspiracy, which resulted in a gunman firing shots inside a Washington D.C. pizzeria. Jones was present at the Capitol on January 6th while leading the “Stop the Steal” movement supporting Trump’s baseless claims that he won the 2020 election.

According to Cornell Law School, compensatory damages are based on a defamation case’s fair market value of damaged property, lost wages, and expenses. Often, punitive damages are awarded at the court’s discretion and are often greater than compensatory damages. They are intended to punish especially harmful behavior. According to Bernard Pettingill, Jr., a forensic economist, Jones and Free Speech Systems, parent company to Infowars, have combined net worth of $135 million to $270 million.

During the Obama administration, Jones posited that Obama, and the media were conspiring to stir up so much racial unrest that a dictatorship would be declared on the pretext of stirring up racial unrest. From the 2020 Frontline article: United States of Conspiracy, Nancy Rosenblum, co-author of A Lot of People Are Saying said the following, “Conspiracism has become a recognized and accepted way of exercising political power. It creates a polarization in the population that’s much deeper than partisan polarization — it’s a polarization about what it means to know something,” Rosenblum added, “I think it’s likely to spread across the political spectrum. And whether it returns to the fringes or not, I think will depend on whether people in office can resist using it.”

Jones has a long list of conspiracies. According to him, the Bush administration was behind the September 11th attacks on America, and the FBI staged the Boston Marathon bombing in 2013, to name a few. Meanwhile, two former employees accused Jones of workplace harassment, racism, and sexual misconduct in 2018.

After admitting he was irresponsible, Jones acknowledges that he believes what happened at the deadliest school shooting in American history was “100% real.” Jones said, “I unintentionally took part in things that did hurt these people’s feelings.”

As Melissa Ryan, CEO of consulting firm CARD Strategies, which tracks disinformation and extremism, states, “conspiracy is a permanent part of our political and cultural discourse now.” What role Ryan believes Jones has in this new era of conspiracy theories, “I think you can say that Alex Jones was an innovator in that.” In the end, there is a possibility that Jones’s damaging and outrageous rhetoric may prove too significant to reverse, which can mean that blacks and other diverse cultures in America could suffer further harm.