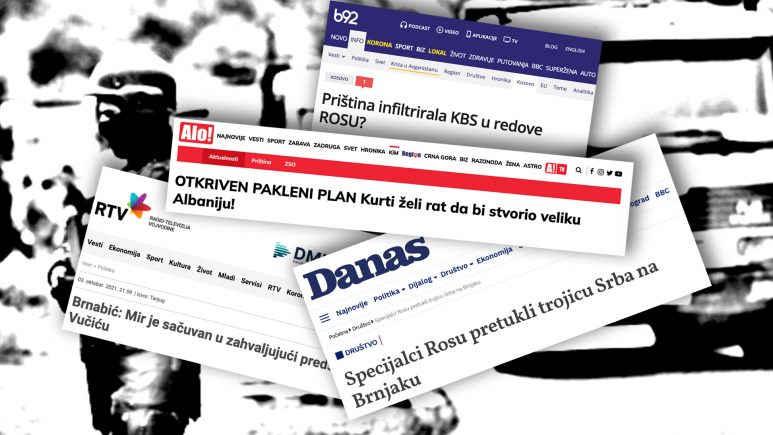 Battle over Headlines: The Kosovar and Serbian Media are on Different Planets

When the media only works to serve those in power, or to agree with the majority public opinion, the flames of tension will only be fanned.

This article was originally produced for and published by Kosovo 2.0 within the framework of RDN 2.0 project. It has been re-published here with permission.

Another “war” between Kosovo and Serbia has ended. This one was over license plates and brought the north of Kosovo back into the spotlight beyond Prishtina and Belgrade. The scenario of this “war” was similar to others in the north. Kosovo used its most serious police force, the Kosovo Police Special Unit, while Kosovo Serbs again erected barricades in the north, in opposition to the government’s decision to enforce reciprocity on license plates. 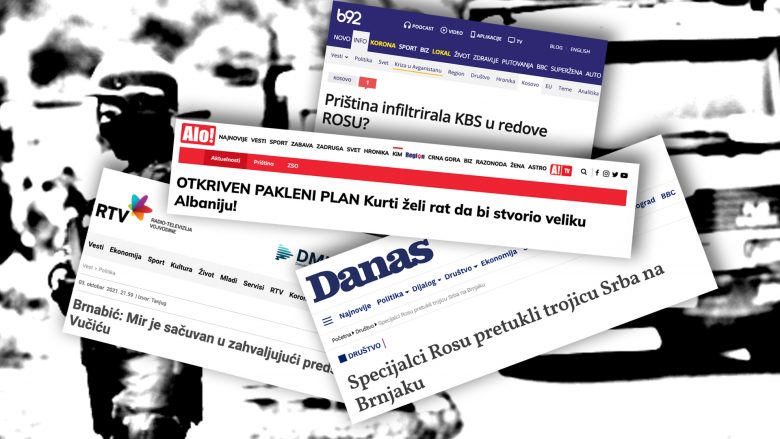 Eventually, after almost two weeks of tensions, both sides saw the need to reduce tensions, and they reached an agreement in Brussels that was more or less similar to one signed in 2016. Of course, both governments present the final result as a victory for their own side.

With the end of this “war,” the media war between publications in Kosovo and Serbia also came to a cease fire. The uneven way the media reports on the conflict between Kosovo and Serbia, as in the case of the license plates, is a tradition of the dialogue that has lasted over ten years. Most media in Serbia follow the official state policy, and those in Kosovo largely conform to public opinion. Conflicting public statements about the agreements and the lack of transparency in the dialogue leads to a conducive atmosphere for tensions.

The media in such cases follows the official line of the state, presenting events how the state sees them rather than how they are in reality. The other side is always to blame. When the media only works to serve those in power, or to agree with the majority public opinion, the flames of tension will only be fanned.

Subtle bits of misinformation guide readers on how they’re supposed to feel. For example, the headlines of most media in Belgrade on September 20 were about ROSU’s seizure of the Brnjak and Jarinje border posts, despite the fact that the ROSU unit of the Kosovo Police has not existed for years. But for most of the press in Belgrade this does not matter. ROSU is conveniently linked to previous conflicts in northern Kosovo and helps the media call back on those events.

Few people in Serbia believe that the epilogue of such conflicts could be war. Many others think that incidents are created for political needs. In fact, the two-to-three day conflicts between Kosovo and Serbia used to be called “weekend wars,” although this time it lasted almost two weeks.

“It seems to us that it was the first time that we came a millimeter away from another armed conflict and, I say without modesty, this was prevented thanks to Aleksandar Vučić. And well done for that, hats off to him,” said Prime Minister Ana Brnabić a few days after the interim agreement in Brussel was reached.

What Prime Minister Brnabić is right about is the fact that Serbia had several times put its army on alert, or at least a part of the army. But since 1999 it had not put these tanks out on the streets, or flown their jets and helicopters in the border area. Serbia can not fly over Kosovo airspace as it is under NATO protection.

Tensions rose on the ground alongside the rising tensions in the media. “HELLISH PLAN REVEALED: Kurti wants a war to create Greater Albania,” was just one of the headlines in the Belgrade tabloids.

Serbia mobilized the entire pro-government media apparatus to react harshly to the Kosovo government’s decision to impose reciprocal measures on license plates. As in previous cases when the National Security Council of Serbia has met, President Vučić again gave the speech he always gives, saying he will not allow “the humiliation of Serbia or unilateral decisions.”

There was some uncertainty as the tensions rose. Serbian-language media reported that three Serb citizens were beaten and Belgrade hastily accused Kosovo police. Kosovo Police denied that such an event took place. Serbian media then covered the story from the hospital where they interviewed men who gave accounts of being beaten by the police. Petar Petković, head of the office for Kosovo, cast blame on Prime Minister Kurti.

“Albin Kurti is directly to blame for this. Now it is more than clear that he is not interested in dialogue or the resolution of the crisis, but only in trying to occupy the north of Kosovo and Metohija by force,” said Petković.

Serbian media also questioned whether the Kosovo Security Force, Kosovo’s army, had infiltrated the ranks of the police operating in the north.

While the Albanian media didn’t directly provoke the situation, they more than did their part in broadcasting the provocations of others. In addition, the lack of access to the Serb community meant that there was no insightful treatment of the situation.

One of the events that was reported in Kosovo, but hardly at all in Serbia, was the news about the presence of four Russians, supposed infiltrators among the Serbs who were passing themselves off as protesters.

“The Russians brought with them three bags, which they opened only when it was dark,” as one article cryptically put it. The article noted that the Russians’ arrival caused concern among local Serbs, but specified some lines later that the “Serbs had come from Montenegro.”

Prime Minister Kurti was also eager to point out the presence of non-Kosovo Serbs at the barricades. He posted images and biographical details of two men on his Facebook page, describing them as Montenegrin and Serbian extremists with criminal backgrounds and links to the Serbian government. The Serbian media did not report on this.

Free movement has been a topic of discussion since the beginning of the technical dialogue and the basis of the first Brussels agreement, which included the initial license plate agreement. But even after reaching the agreement ten years ago it was unclear what was actually agreed upon.

At first, Kosovo license plates were not allowed to enter Serbia at all, despite the fact that they did not include the acronym of the republic and were still only “KS.” At one point, drivers with Kosovo plates entering Serbia had to pay around 30 euros for a three-day provisional license and over 100 euros for a month-long license. Later cars with “KS” license plates were allowed entry into Serbia free of charge, but not “RKS” plates.

Soon Serbia was accepting Kosovo identity cards, but no one could explain what the agreement had to say about Kosovo passports. This may not have been a problem for people traveling back and forth between Kosovo and Serbia, but for holders of Kosovo documents traveling by plane through Belgrade, it was a major issue.

Serbia now allows travelers with Kosovo ID cards to fly out of the Belgrade airport if they have a valid visa and a temporary document issued by the Serbian police. So two documents and a letter are needed. This has left many travelers confused. Sometimes even the Serbian police do not know the details of the agreement and will say something like, “with these documents you can only travel by land, but not by air.”

The ambiguity of these agreements is reinforced by a lack in the media space. Most Albanian-language media do not have correspondents in Belgrade or Brussels, and few Serbian journalists working in Kosovo speak any Albanian and when reporting tend to show Kosovo exclusively through the official lens of the state. All this does not leave much room for balanced information on such a sensitive issue as the relations between Kosovo and Serbia.

The phenomenon of Kosovar and Serbian media reporting entirely different things has been a part of the dialogue from the beginning. The lack of information about the agreements leaves citizens to figure out the details on their own, without proper guidance. Above all, it hinders the normalization of relations between the two peoples.

Author: Idro Seferi is an independent journalist based in Belgrade. He kicked off his journalism career in 2003 in Peja, Kosovo, and has worked for over 20 media in different languages.