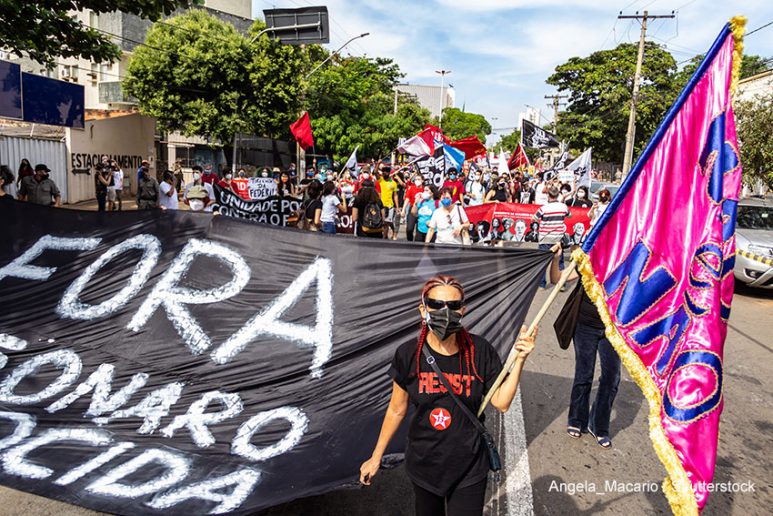 Among the main victims of the pandemic in Brazil are indigenous people and the poorest black and brown populations, who are unable to practice social isolation. By hiding the demonstrations, the media adopts a racist position.

On May 29, thousands of people took to the streets in over 200 cities in Brazil in order to protest against President Jair Bolsonaro and his Covid-19 policies. The protests were called by People without Fear (Povo sem Medo), Popular Brazil (Brasil Popular), and the Black Coalition for Rights (Coalizão Negra por Direitos) which usually bring together hundreds of social movements. Minorities, indigenous people as well as those living in poorer areas in Brazil have been affected the most by the pandemic and the government’s policies and for this reason protests against President Bolsonaro have become more frequent in the country.

Although May’s protests were the were the largest protests in the country since the pandemic began, much of the media simply ignored them. Apart from the newspaper Folha de São Paulo, the country’s largest TV channels, including GloboNews and CNN, as well as largest newspapers, including O Globo and Estadão, did not cover the protests live. At the same time Jornal Nacional, the main news programme of Brazil’s largest TV channel, Rede Globo, devoted little time to the protests. 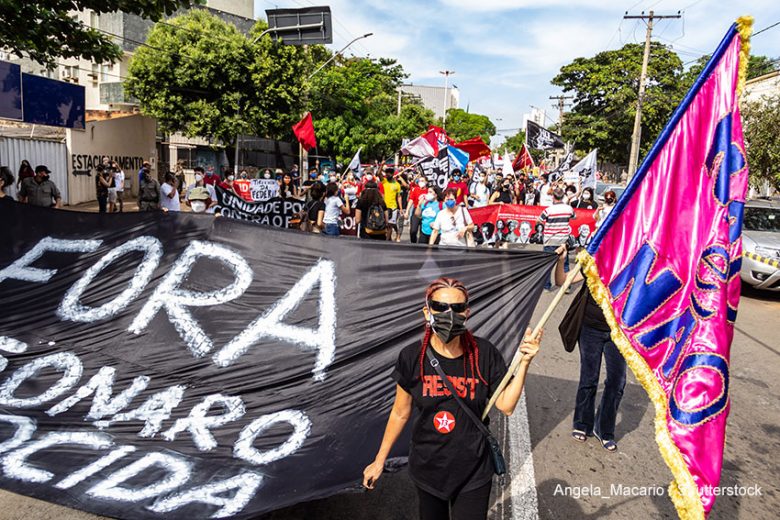 The way the protests were covered – or not covered – by the country’s media led to widespread criticism from journalists and media experts. In addition to this criticism questions were raised on the way indigenous people, minorities and those from poorer areas are covered by the media.

Eduardo Barbabela who holds a PhD in Political Science from IESP-UERJ and is a researcher for the Manchetômetro, a website that monitors the coverage of the mainstream media on issues of economics and politics produced by the Laboratory of Media and Public Sphere Studies (LEMEP) of the State University of Rio de Janeiro, notes that “The decision to ignore the first demonstrations of a new movement is something we have historically noticed”.

He cites the protests of June 2013, the largest to date in the country’s history, in which

“the first demonstrations were not reported, but soon they began to occupy more and more space in the coverage. The media still does not know the real power and the agendas that will be put forward by these movements. For this reason, it is common that the demonstrations are initially ignored.”

The topic is controversial, to say the least.

“We live in a country with a genocidal government that has denied the science to combat pandemic and has refused to install measures of social isolation, to negotiate vaccines and has denied the use of the mask. The demonstrations called for impeachment, combating hunger and vaccination, and what we notice with the editorial lines of the main newspapers is the defence of an economic neoliberalism. For us, especially the black population that has been devastated by Covid and the financial and human rights crisis, what we perceive is a total contempt of these media organisations,” Allyne Andrade, from the Black Coalition for Rights tells Media Diversity Institute.

Among the main victims of the pandemic in Brazil are indigenous people and the poorest black and brown populations, who are unable to practice social isolation and continue to be forced to face crowded public transport to get to and from work. To Andrade, by hiding the demonstrations, the media adopts a racist position, contrary to human rights and democracy and “they benefit the government.”

“It is difficult to say that not covering the protests was a way to defend the government since we have a coverage of the Parliamentary Investigation into the government’s handling of the pandemic that has focused on attacking the mistakes and highlighting the various government malfeasance during the pandemic,” he continues.

Does the lack of media coverage hurt minorities?

This non-coverage ends up making it clear, says Andrade, that the media “is not an ally of the Brazilian population, but of economic interests that accept deaths as part of the game, and accept human rights setbacks against minorities – which in fact are the majority, such as blacks and the poor. And it is not possible to build a democracy with racism.”

“When the media silences it ends up defending this agenda – even if it has positions at other times that do not convey this idea, but the non-coverage of the demonstrations is an endorsement of a fascist agenda,” she sentences.

Moherdaui, on the other hand, believes that the print media or even television no longer has the same power it used to have.

“What surveys indicate is information consumption by social networks and apps. A Reuters Institute survey from 2020 indicated that, for the first time, the internet surpassed TV as a source of information among Brazilians. And social networks have taken the lead, including WhatsApp,” she tells Media Diversity Institute.

Therefore, she does not believe that the editorial decision of the media “benefits the government” particularly because print newspapers “are absolutely critical of the President’s denialism and strategies to defend drugs without scientific proof to the detriment of vaccines.”

On the day Brazil reached the regrettable mark of 500 thousand deaths due to Covid-19, on Saturday 20 June, new and large protests against the president took over the country once again. And the media decided to cover them. The next day, the demonstrations were on the cover of all major newspapers and TV channels followed the demonstrations live.

“After the criticism of the [social] movements and after the exemplary coverage by independent media in the previous protests, the mass media adopted a new positioning,” celebrates Andrade, adding that “this is the result of this criticism from social movements, blacks, indigenous peoples, quilombolas, landless and homeless movements and civil society organisations in defence of human rights that were not intimidated by the silencing and remained in the streets.”

There is a growing movement seeking to expand the diversity of voices in the media, expanding spaces for blacks, women, and members of other minorities amid criticism about lack of diversity. Barbabela notes that “the voice that speaks the opinion in the big newspapers is mostly male and white.” But some changes can be noticed.

For Moherdaui, the criticism is not new, yet she believes that “scattered profiles on social networks have taken the lead with specific coverage because of this gap,” and that increasingly it is the internet, and not the traditional media that has and will have relevance in the production and “distribution of quality information.”

When thinking about vulnerable minorities specifically, Barbabela says that

“we have noticed some reports that highlight the worsening living conditions of these groups, but most of the coverage focuses on themes such as violence and poverty. However, they do not usually go beyond specific discussions on the themes and avoid dealing with issues that may be considered controversial in society, thus, specific discussions about the most vulnerable minorities are hardly ever highlighted in the media, which favours superficial and generic discussions about much more complex and profound issues.”

The role of the media, then, “is to denounce human rights abuses, and also to investigate and produce information on the co-optation of institutions for President Bolsonaro’s genocidal and fascist agenda,” says Andrade.

It should go beyond covering or criticising pointedly the government’s agenda as, Andrade notes, “the attacks that have been happening in indigenous territories, quilombolas and favelas, highlighting the government’s incompetence and also how the government acted so that we could not implement effective measures to combat the pandemic.”

And the media is also target of attacks by the president and his supporters, therefore it is also in the media’s own interest to defend itself and, in the process, to defend democracy.