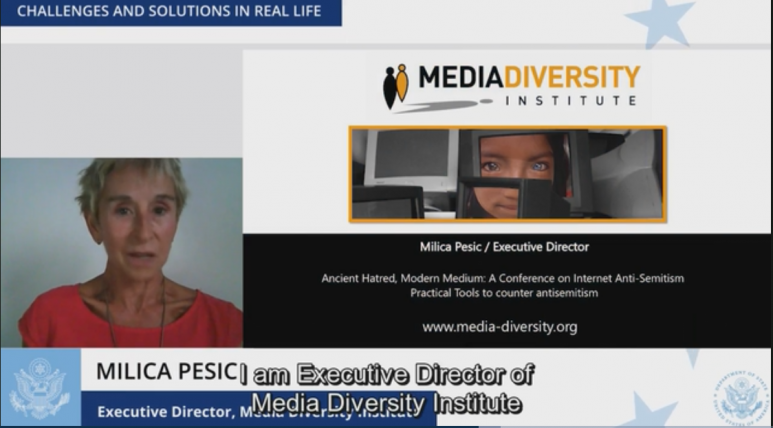 A recent survey in the US revealed a shocking result. Two thirds of the youth in the US, between the ages of 18-39 do now know what the Holocaust is and 23% of them believe that it is a myth. The survey came during a time when anti-Semitism, especially online, is on the rise. By identifying this problem, the US Department of State hosted the “Ancient Hatred, Modern Medium” conference and gathered global leaders, religious representatives and civil society actors and activists on online anti-Semitism. Milica Pesic, Media Diversity Institute’s Executive Director, took part at the conference and presented the tools that MDI has developed over the years in order to combat online hate.

The first day of the conference focused on anti-Semitism is framed and the ‘triple threat’ from the far right, the far left and militant Islam. It also looked at the legal framework and why laws and regulations are not enacted to ban anti-Semitism online. Part of solving a problem issue is starting by defining it: what is anti-Semitism, how does it look like and what is the result of the national and institutional adoption of the International Holocaust Remembrance Alliance Working Definition of anti-Semitism by nations and institutions? For some people, however, anti-Semitism becomes personal as Luciana Berger, former Member of the UK Parliament for the Labour Party, explained. Yet knowledge is power as Dr Charles Small and Joel Finkelstein explained. 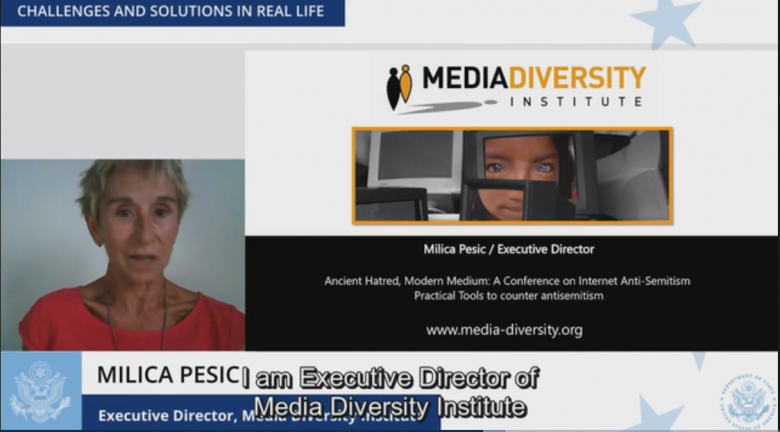 When it comes, however, to online hate speech and online anti-Semitism how much responsibility do internet providers have? Peter Stern, Jeffrey Collins, Michal Colter – Wunsh and Hany Farid tried to give an answer on who should set the rules.

In addition, how does the activist community respond to such a challenge? MDI’s Milica Pesic was joined by Imrad Ahmed and Nitzan Tamari in a panel that tried to explore the way different ways and techniques different organisations try to combat online anti-semitism.

By citing the recently published survey on the Holocaust Milica Pesic stressed the importance of this conference and presented the work that MDI has been doing throughout the years. Through the creation of educational videos, media monitoring, resources, campaigns, explanatory videos, reports, cartoons and the use of complaints MDI has been fighting online hate and online anti-Semitism for years.

However, MDI’s tools adapted to the changes of the online environment and some of the campaigns and tools have led to fundamental changes in some institutions. One such example is the QAnon report that MDI produced recently and played a vital role for the change of policies in several institutions.

Online anti-Semitism is the new dimension of a very old problem. However, with the collaboration and will at a political and activist level it will be easier to be fought.

“Social media platforms and their audiences are changing rapidly. So we have to adopt and find the right ways and right tools to approach, to be appealing to young people across different platforms,” Milica Pesic, concluded.

You can watch the event here.