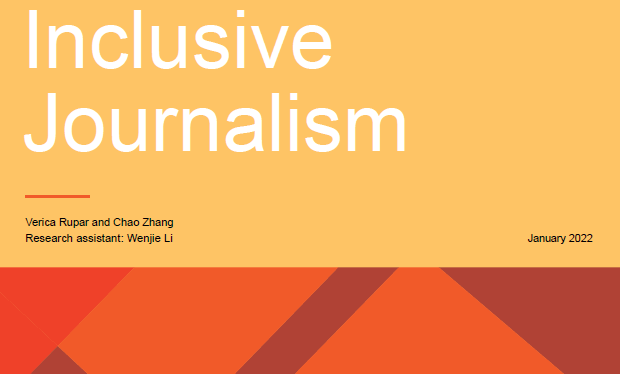 The Media Diversity Institute developed an Inclusive Journalism Handbook aimed at academics, journalism students and journalists providing them with the main principles of diversity and inclusion, responsible reporting in the age of increasing inequalities and divisions. The Handbook is an excellent resource not only for the journalists, academics, and students in the Chinese context but across the world. The authors of the Handbook are Dr. Verica Rupar and Dr. Chao Zhang .”

From the Handbook’s Introduction:

“The handbook Inclusive journalism takes the UN Declaration of Human Rights as a reference point for offering an overview of major issues related to reporting diversity and a range of case studies that could be used in designing and running university courses aimed at increasing students’ knowledge and understanding as well as awareness of the issues that are involved in reporting of diversity. Journalism education across the world has traditionally covered practical skills and vocational training and broader, contextual education based on a need for intellectual independence and contribution to informed citizenry. But what journalism schools should teach to equip students with knowledge and skills to improve the ways media approach diversity issues remains an ongoing task. The specifics of journalism and journalism schools have often been defined by the demands of the industry needs – a challenging situation as many of us have passionately argued over the years. These demands differ from country to country and are naturally determined by culture, by law, politics, economic system and history, but the urge for a balance between vocational and academic, between practical and contextual knowledge seems to be universal goal for journalism programs worldwide.”

The handbook is aimed to be used as a textbook in journalism schools. It has been written in the context of China, but its content and examples would also serve journalism teachers elsewhere well. The first part of the book introduces theoretical and methodological frameworks. (…) The second part of the handbook presents Case studies, examples of the media coverage of race, ethnicity, religion, gender, religion, age, sexual orientation, disability, geography, social and marital status.”