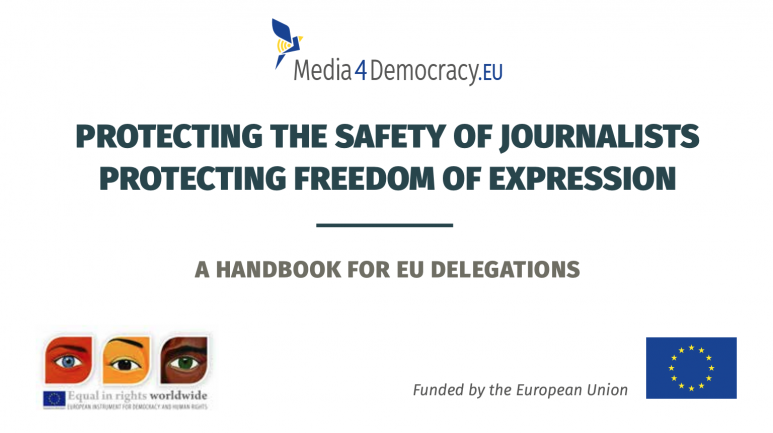 Protecting the Safety of Journalists, Protecting Freedom of Expression

A Handbook for EU delegates

This Handbook was produced by Media4Democracy, which is a European Union-funded Technical Assistance Facility provides customised technical support to strengthen European Union Delegations’ ability to support media and freedom of expression. Freedom of opinion, freedom of expression and the right to information are basic human rights guaranteed by the United Nations in 1948, and are cornerstones of public debate and democracy.

However, freedom of expression and the journalist safety advocates face major challenges worldwide, including within the European Union. The 2019 RSF World Press Freedom Index shows that the number of countries regarded as safe for journalists continues to decline. In many countries, journalists and media outlets face censorship, political and economic pressure, intimidation, job insecurity, and abusive use of defamation laws and other legal instruments, in addition to threats and physical attacks. These offences are often committed in a context of impunity, which has a chilling effect on media freedom and freedom of expression. 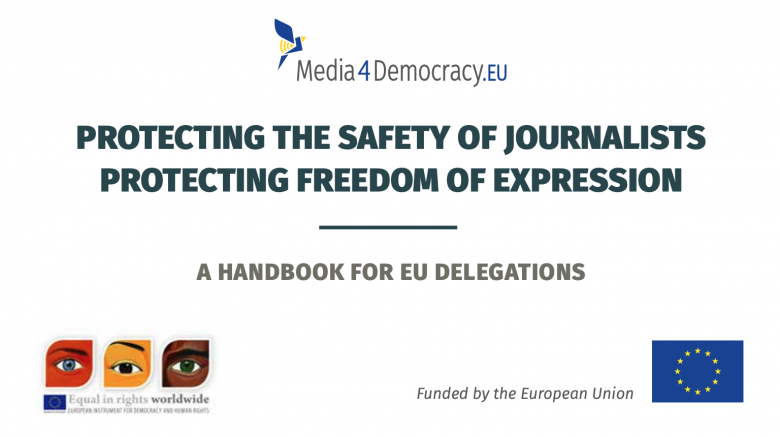 This Handbook, which provides non-compulsory technical guidance to EU Delegations, aims to provide tools and hands-on examples to support them in implementing the Guidelines and in taking actions to support the safety and security of journalists in their context. First, the Handbook presents a brief on the European and international policy framework regarding safety of journalists and clarifies relevant concepts. The second section focuses on the actions EU Delegations can carry out in their own local context – working in an emergency situation, or as tools for mid- and long-term policy and programming.

Final-M4D-Safety-of-Journalists-Handbook
We use cookies on our website to give you the most relevant experience by remembering your preferences and repeat visits. By clicking “Accept All”, you consent to the use of ALL the cookies. However, you may visit "Cookie Settings" to provide a controlled consent.
Cookie SettingsAccept All
Manage consent