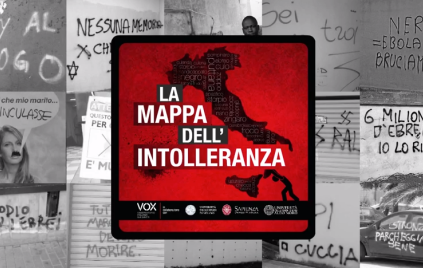 In Italy, a total of 2 million hateful tweets have been registered over eight months. An Italian study has revealed that in the period from January to August 2014, more than 1 million tweets were directed against women and half a million against disabled people. 154,000 tweets were racist, 100,000 homophobic, and 6,000 anti-Semitic.

Vox Diritti, in cooperation with three Italian universities (Rome La Sapienza, Bari, and Milan) closely watched what has been said on Twitter against specific groups and, using an example of the California Humboldt State University’s Hate Map, created five geographic maps showing the “temperature” of hate in Italy. The North, Lombardia in particular, has the county’s dismal record as the most intolerant area on Twitter. 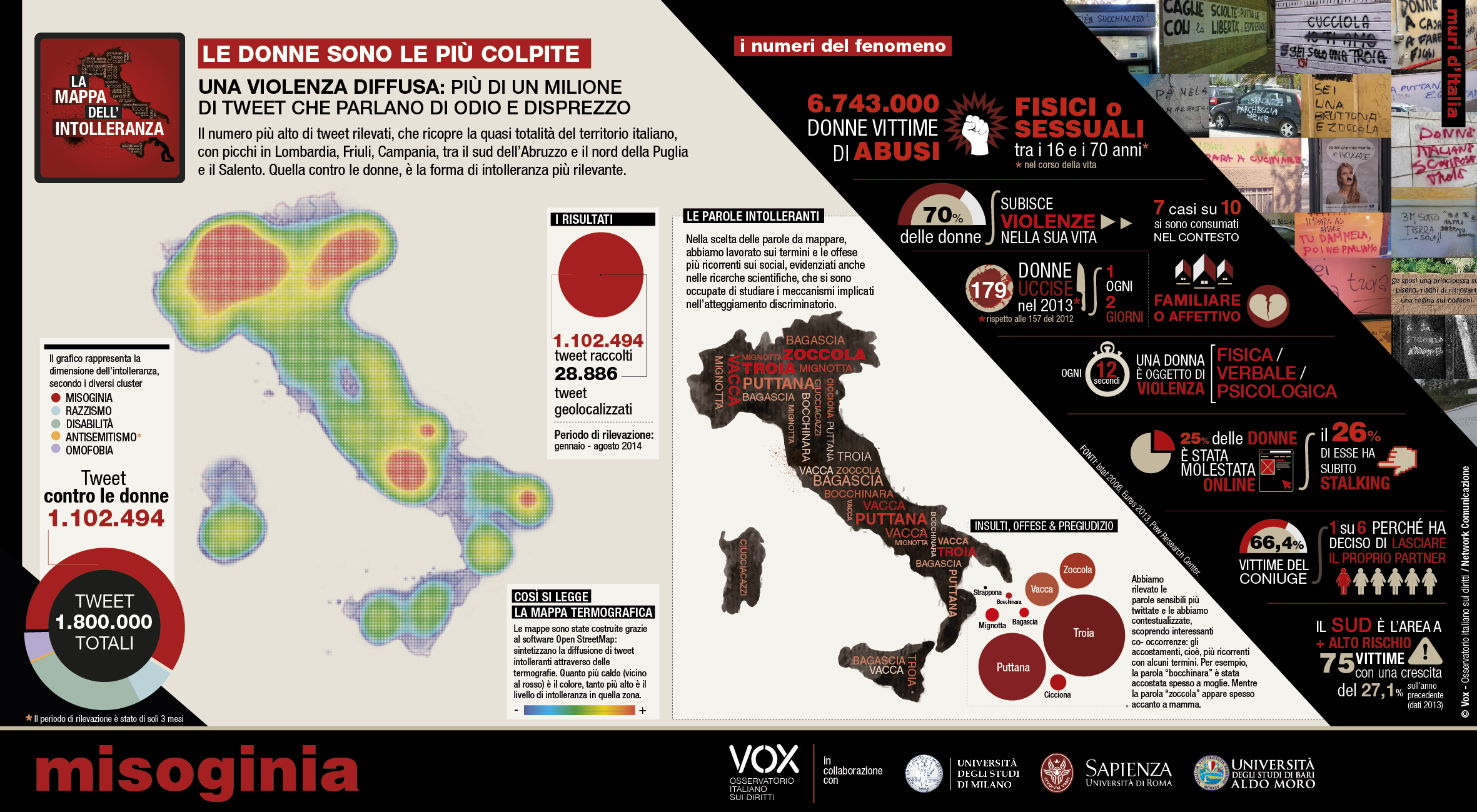 With more than 1 million tweets conveying hatred and arrogance against women, they are the most affected group. Sexist tweets had a wide spread over the country, but the highest incidents were registered in Northern Italy and Campania (near Naples). 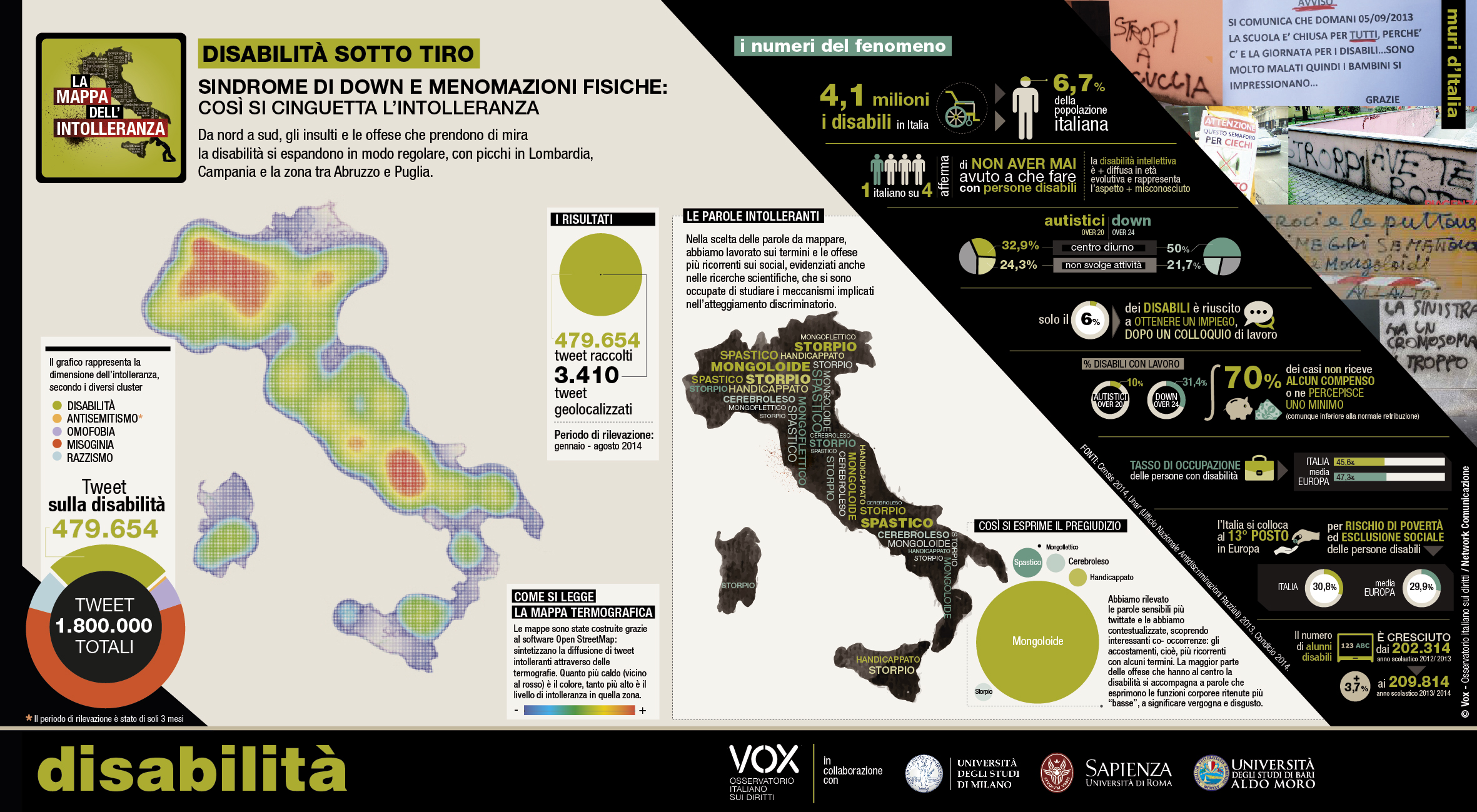 More than 500,000 tweets targeted disabled people. Mockery and insults regarded mainly people with Dawn syndrome and physical impairment. Where? Everywhere, with peaks in Lombardia and Campania. 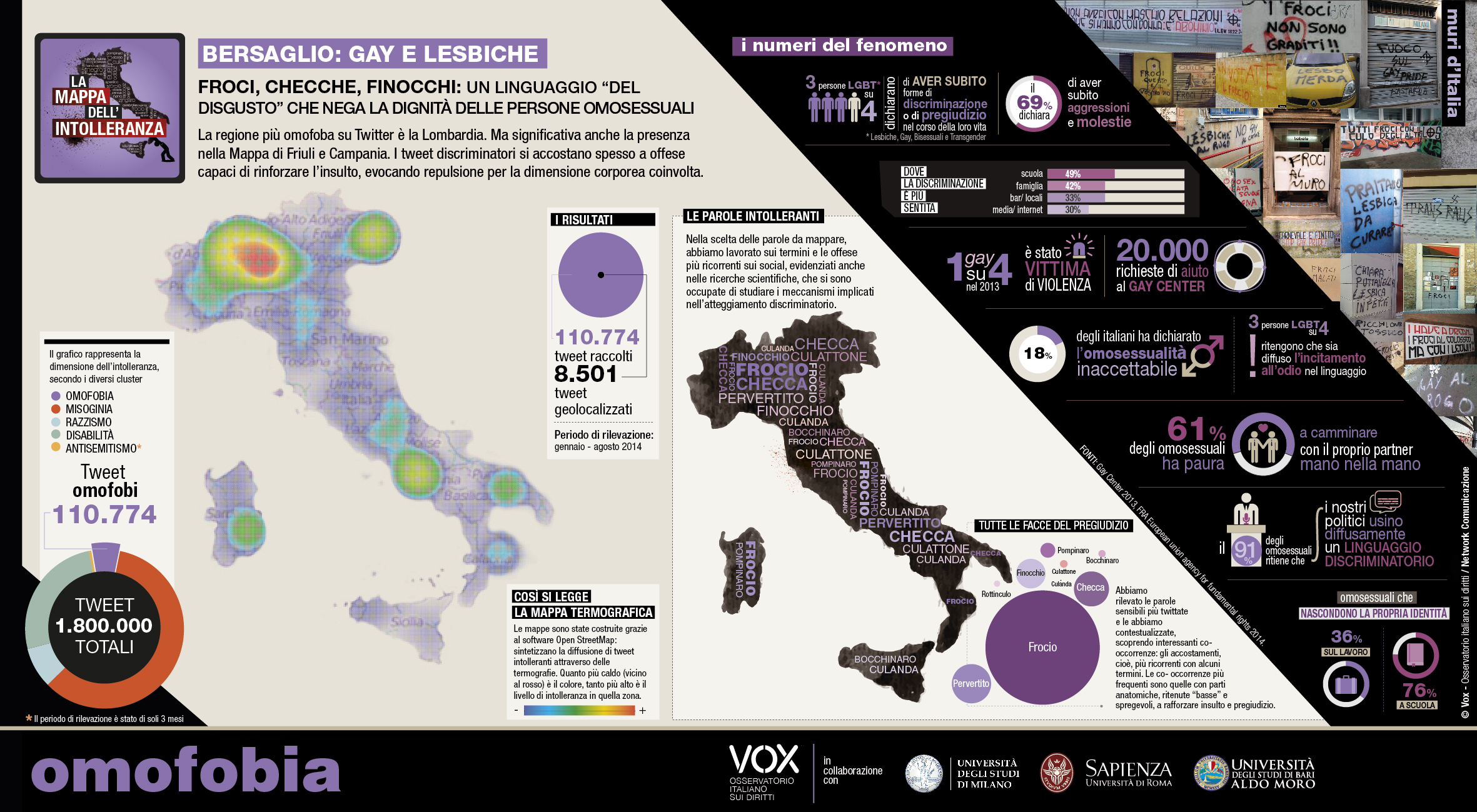 Slanders against homosexuals were recorded in 100,000 messages, combining derogatory terms with insults evoking parts of the body. Once again, the most homophobic region is Lombardia. 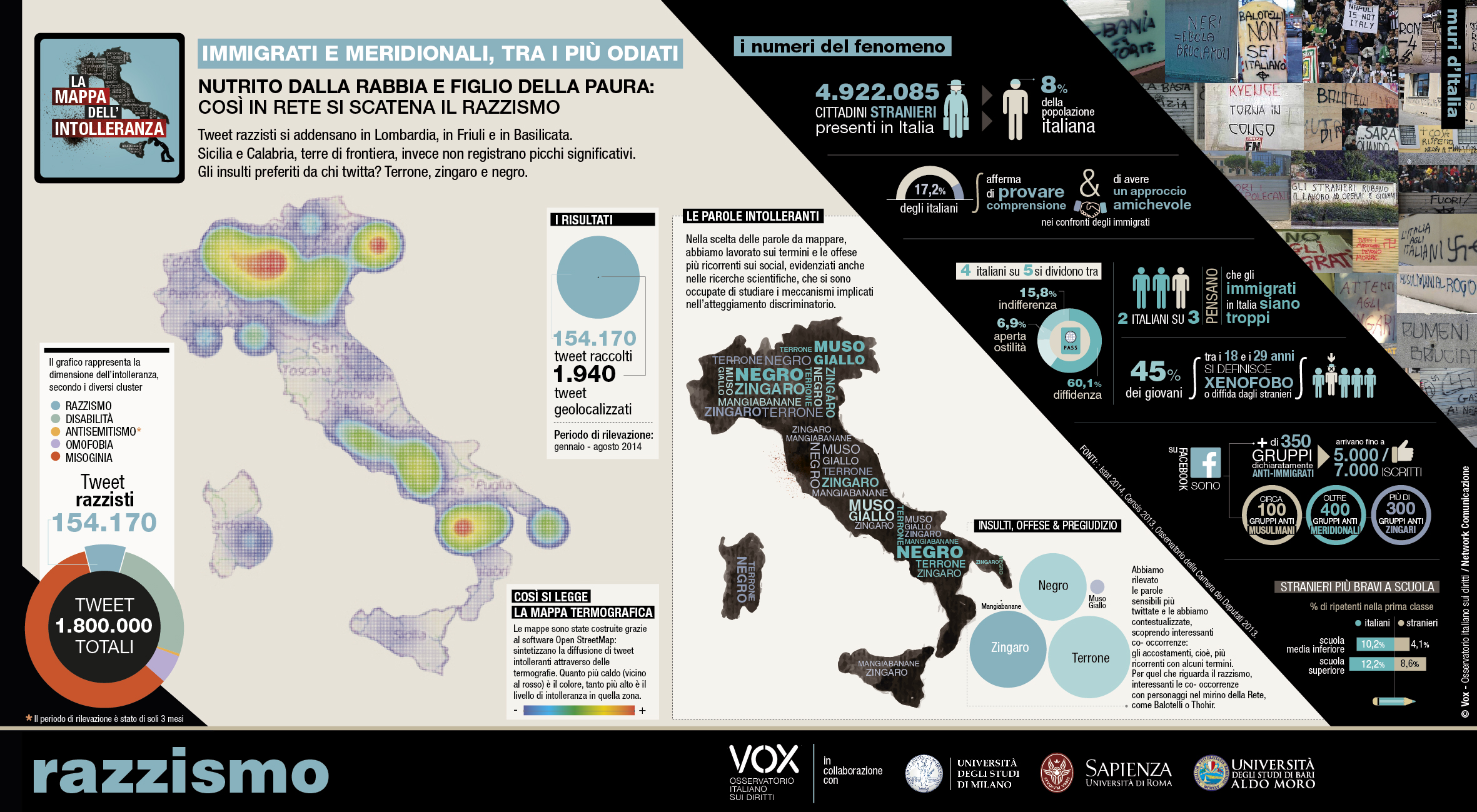 The xenophobic tweets were about 154,000, and came from specific areas: North (Lombardia), North East (Friuli), and South (Basilicata). Black and Roma people are the most abused groups online, but a high percentage of insults were also directed towards Italian southerners. 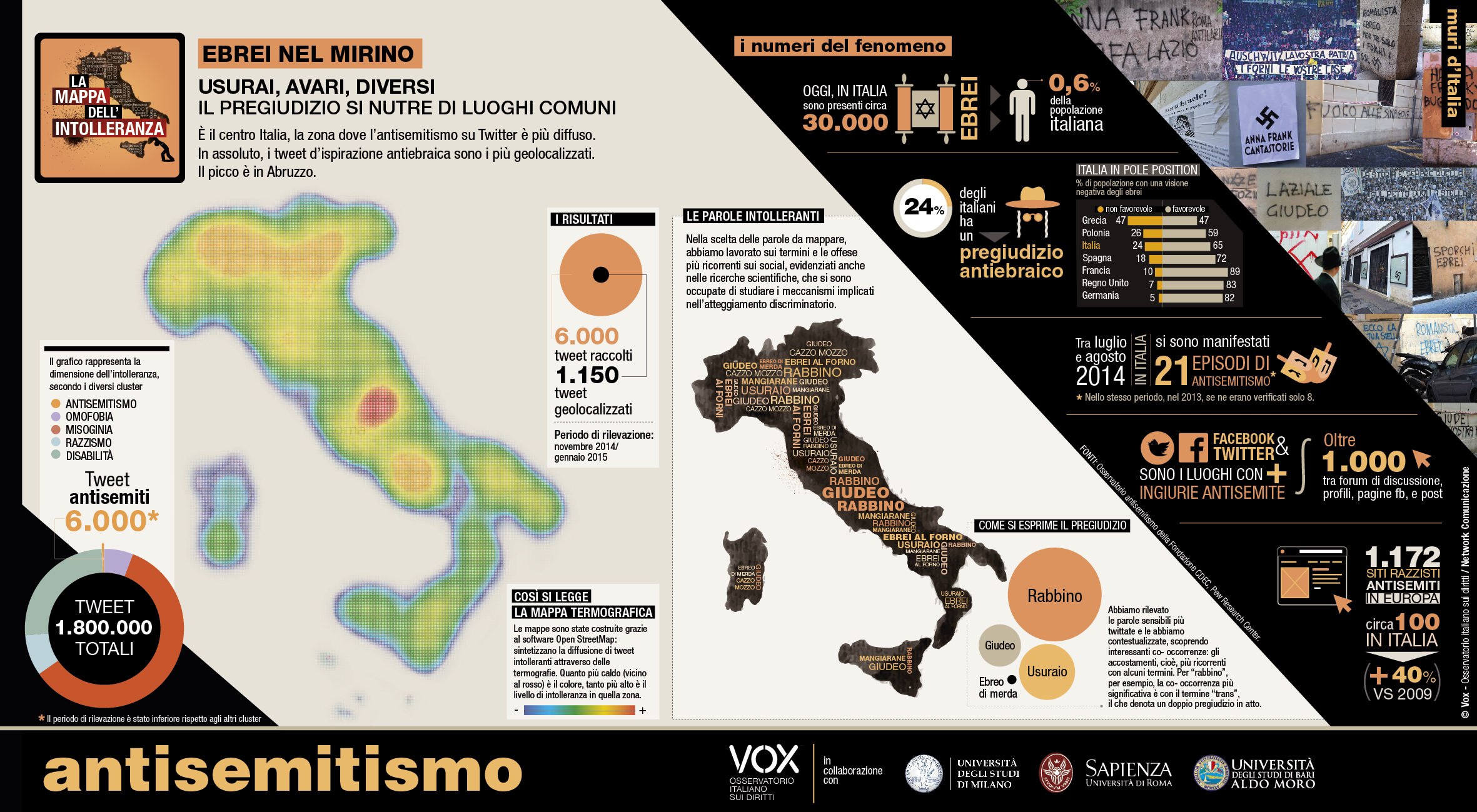 Anti-Semitic tweets come from all parts of Italy, mostly from Abruzzo (central Italy). The content of the tweets repeated old stereotypes against Jewish people and some also included sexuality-related insults.

“What emerges is that the offences against women, gay people, immigrants, Jews, and disabled people very often have a corporeal dimension. Those who are so easily sexualised and humiliated online, in the real life might end up being beaten or raped,” said Silvia Brena, journalist and co-founder of Vox Diritti, at La Stampa.

According to the researchers, the escalation of hate messages and carelessness in shouting insults online lays the foundations of hatred, leading to violent actions and hate crimes in public places. The project Map of Intolerance aims at preventing hate speech online, but also at encouraging local institutions to implement more inclusive policies.

“I don’t think Italy is a country full of hate, but believe that it is on a comatose state,” said Ivan Scalfarotto, LGBT activist and undersecretary of the constitutional reform department. “It’s important to highlight the real impact of words.”