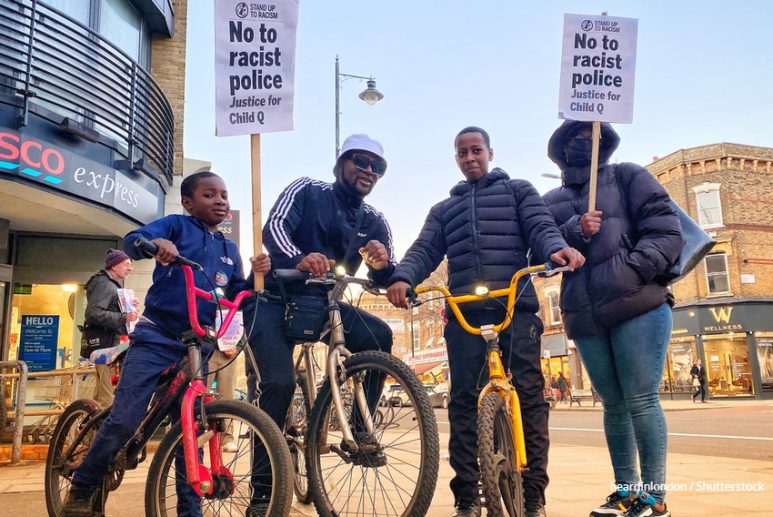 Although social media are to blame for many things, the power they have to highlight issues of social injustice cannot be compared. The case of Child Q brought to the fore a global allyship that can play an important role in avoiding another incident of this nature.

The case of Child Q is one that has shocked many across the UK and beyond. Child Q was at school when two of her teachers accused her of smelling cannabis. When the Metropolitan police were called to school, they conducted a strip search while the girl was on her period. That incident left the girl traumatized and in shock. The incident came to the fore from a school report two years after it happened and it gained publicity as it spread on social media.

The child was without any appropriate adult supervision whilst being strip searched, and the entire handling of this is a stark reminder of the unjust and inhumane conditions that ethnic minorities have to face at the hands of police. On top of that, this shocking case comes with a dark realisation of institutional racism and discrimination ethnic minorities face within the education system.

A 2020 research poll by YMCA found that 95% of Black British children in school hear racist language, and 49% said they believed racism was the biggest barrier to their academic attainment.

“The experience of Black children tends to be the most isolated out of any other race in the education system. They are faced with micro and micro aggressions, statistics being very clear about this. This is probably due to the systemic racism that has been embedded in the identification and diagnostic system that is used to assess children. More recently, I’ve seen stories of Black children being perceived and therefore treated as adults with moral reasoning. The fact that they are still children, who are still developing and maturing, is often dismissed. Black children are most likely to be biased when it comes to teacher assessments and not treating all students equally – there is ample research on this with cases on non-Black teachers automatically perceiving Black children as a threat, and approach them with a defensive or conflict driven mindset. I don’t know much how unconscious bias training needed to really erase that pattern of thinking. Our teacher training system doesn’t help us in dealing with that,” Kanayo Dike-Oduah, an award-winning Psychology teacher with a strong background of working with children tells Media Diversity Institute.

Kanayo’s findings here are just a small insight to the very harrowing conditions Black children in education have to face. Almost every aspect of their life is impacted; from how they perform academically, to the hair growing out of their scalp.

Also found in the YMCA report was the urgent push for campaigners in equality to tackle school policies on hair, resulting in some Black children being excluded. A child feeling like they have to change the texture of their hair in order to be accepted in a school, suggests a lot about the fundamental values of that institution.

In the case of Child Q social media played a crucial role in the publicity this case gained. What followed the online outrage was a series of protests demanding justice. For Kanayo Dike-Oduah the story had personal effects as a teacher and as a Black woman.

“ [Child Q’s case] moves me firstly as a Black woman, and formerly a young girl who can identify with Child Q. I can’t begin to imagine the dishonour, failure and  trauma that she experienced. Yes we know about the police and how they discriminate, but for me, Child Q was firstly failed by her teachers. Children spend most of their time in schools, and as a teaching profession, we failed her. Whilst I do not know the school, in terms of what they need to do better, is to ask themselves why is it for a Black girl – that their first call was to the police, and not the child’s parents? Would they do this if the child was white? If not, then why is there a difference in treatment?” she says.

“How diversity, equality and inclusion is understood  is also really important to challenge if it’s something beyond the school policy – or practiced and reflected through their actions,” she continues.

Although social media are to blame for many things, the power they have to highlight issues of social injustice cannot be compared. The case of Child Q brought to the fore a global allyship that can play an important role in avoiding another incident of this nature.

It’s sad that in 2022, parents considering schools for their black children are forced to to consider and perhaps directly ask school leaders, safeguarding leads and teachers:
1. What is the experience of black children at your school? How do you know this (evidence)?

“Allyship is on so many levels. Most importantly, we need to look at the system and the institutional level. Similarly to what I share on Twitter, the same safeguarding that is used to ensure we keep our children safe in schools, needs to be reviewed. I can understand reasons for having police in schools, but their roles must be crystal clear, and there should not be any abuse of power tolerated. Allyship starts with police communicating exactly what they are doing, offering, and ensuring teachers are at the forefront of keeping students safe. Safeguarding should be everyone’s concern. With the case of what happened to Child Q – there was definitely an error in how her school deals with incidents. In my years of teaching, I have never heard of a school calling in police officers to strip searched a child who smelled of weed (drugs).

Secondly, in terms of how schools are systemically built for white spaces, these spaces therefore seep right through the curriculum. Our curriculum is not an ally to Black children. There isn’t always a clear way to deal with a situation that includes a student experiencing racism. It’s almost ignored or considered as irrelevant. There is an issue with the curriculum and the way it’s taught – Black students having to learn about their history through a European lense, for example. Also if you think about it, middle and senior leadership in education is largely occupied by white teachers. Allyship starts with recruitment, curriculum, and how the needs of the students are genuinely listened to,” Kanayo Dike-Oduah tells Media Diversity Institute.

A key message from this is the importance of safety. A child should always feel safe and freely accepted in school, and it should not be a norm to feel endangered in police presence. We need stronger intervention to ensure that safety is put at the forefront, and that it extends beyond its physicality. Provide support in knowing that someone being targeted is not alone.

Despite the horrific incident Child Q had to face, it comes with slight relief in her sharing a message of thanks for the support received.