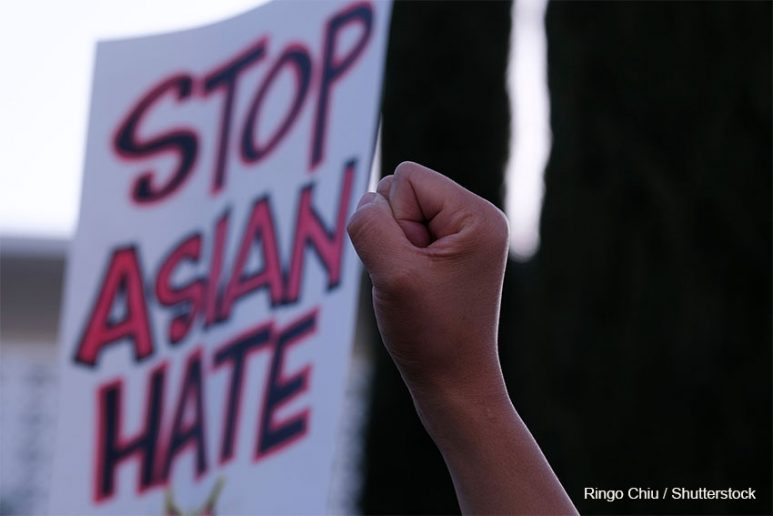 Social media companies need to update their hate speech policies to include coronaracism and to better support communities affected by anti-Asian hate.

By Mikhail Yakovlev and Eline Jeanné

The COVID-19 pandemic has affected all but the most isolated communities around the world. Unfortunately, the global health crisis precipitated a second pandemic – anti-Asian racism. Social-media echo chambers – responsible for  all types of hate and disinformation over the last decade – have once again made things worse.

At the same time, anti-Asian hatred is not a new phenomenon. It “has a long, grim history” in the West. Understanding the hidden systemic causes of such hate is necessary if we hope to combat it. Before going any further, what is the right term to describe the current, coronavirus-related variety of anti-Asian abuse? ‘Coronaracism’, ‘anti-Asian hate’, anti-Chinese hate’, ‘anti-China hate’ and ‘Sinophobia’ have all been used in the media. ‘Coronaracism’  most specifically denotes racial hatred or xenophobia directed against a particular group in light of the COVID-19 pandemic. This term encompasses all demographics that are being singled out, be it Black communities in China or Roma communities in Europe. On the other end of the spectrum, ‘anti-Chinese hatred’ ‘Anti-China hatred’ and ‘Sinohopbia’ are not COVID-specific and do not account for the indiscriminate way all people of East Asian appearance are being targeted right now. 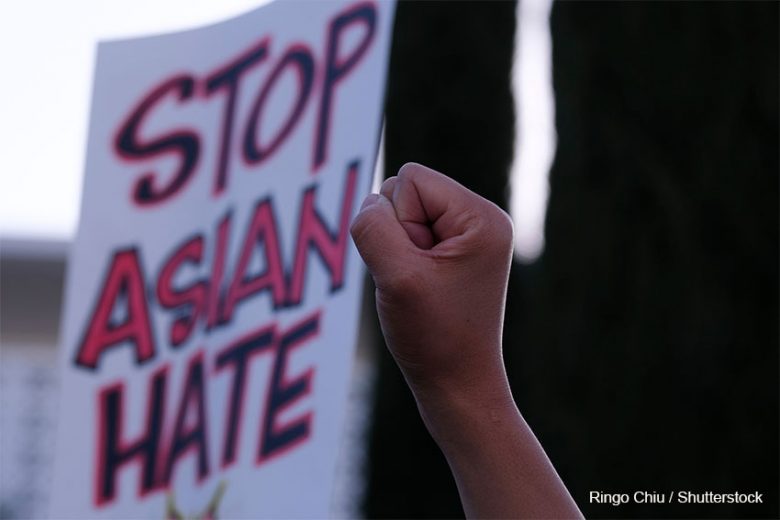 “I was adopted from Hunan province at 11 months-old, and was raised in the UK. I do not speak Chinese, nor do I have any connection to the PRC [People’s Republic of China] beyond the occasional tourist visit.  What we are seeing with Coronavirus, however, is a phenomenon that is not confined to PRC citizens, nor even to people of Chinese heritage living in other countries, but rather discriminatory and racist attitudes and actions encompassing everyone[…] with an East Asian appearance,” explains Emily Couch in her March 2020 blog ‘East Asians Are the Model Minority – Until We’re Not’.

In addition, there are legitimate concerns that using the terms ‘anti-China hatred’ and ‘Sinophobia’ can risk suppressing criticism aimed at PRC as a state and the Chinese Communist Party, as well as PRC citizens that support it, over the brutal persecution of the country’s majority-Muslim Uyghur, Kazakh, Uzbek and Kyrgyz minorities in Xinjiang and the suppression of Hong Kong’s limited democracy.

For the purposes of this article, we have opted for ‘coronaracism directed at individuals and communities of Asian, Pacific-Islander and Inuit-Yupik-Aleut appearance’ or just ‘coronaracism’ for short.

Coronaracism has gained significant traction on social media throughout the pandemic. At the start of 2020, former US president Donald Trump regularly referred to COVID-19 as the “Chinese virus”, and this term has stuck on social media since. After the University of California San Francisco (UCSF) conducted a comparative study of close to 700,000 tweets, they found that individuals who used the #ChineseVirus hashtag were more likely to also include overtly racist hashtags than individuals who used the hashtag #Covid19.

“These results may be a proxy of growth in anti-Asian sentiment that was not as prevalent as before. Using racial terms associated with a disease can result in the perpetuation of further stigmatization of racial groups,” explains lead researcher on the study Yulin Hswen.

If you are to go on Instagram right now, you can easily search the hashtag #ChineseVirus which has been used over 68,000 times on the platform. Whilst there is a health warning on the page, urging you to seek out official sources for information on COVID-19, anyone is able to access the hashtag. The posts used the #ChineseVirus tag include conspiracy theories around the virus, anti-vaccination and anti-mask content.

This example highlights just how vague social media policies around coronaracism really are.

“You may not promote violence against or directly attack or threaten other people on the basis of race, ethnicity, national origin, caste, sexual orientation, gender, gender identity, religious affiliation, age, disability, or serious disease.”

The United States alone has seen a 169% increase in anti-Asian hate crime in the first quarter of 2021. A study conducted by the Pew Research Center, found that 32% of Asian adults in the United States have feared someone might threaten or physically attack them. Speaking about the results, Neil G. Ruiz of the Pew Research Center wrote: “Some 20% directly cited former President Donald Trump and his rhetoric about China as the source of the pandemic, his racist comments or his labeling the coronavirus as the “kung flu” or “Chinese flu” as one of the reasons for the rise in violence.”

Whilst some may want to differentiate between the online and offline world, we cannot ignore that the two are often interconnected. Ideas and narratives consumed online can have a great impact on offline action, and in some cases, lead to violence.

This sudden upturn in anti-Asian violence exposed the fragile foundations of ‘the model minority myth’.

In the 2017 Al Jazeera mini-documentary titled Why Do We Call Asian Americans ‘The Model Minority’, Professor Frank Wu explains that until the 1960s and 1970s Asians tended to be viewed as Opium-smoking carriers of venereal diseases. The alternative ‘model minority’ discourse only started to gain traction as a way to countenance the Civil Rights movement in the 1960s. In essence, it was a way to insult Black and Latinx Americans by implying that their predicament was caused by laziness, as opposed to structural factors.

In turn, Asian Americans were left with the heavy internalised burden of feeling pressure to conform to ‘model minority’ expectations, adversely impacting individuals’ mental health and making it difficult to speak up about racism.

For one, Couch believes that COVID’s rupture of the ‘model minority’ is cause for cautious celebration – “the Coronavirus has one silver lining: It has shattered the myth that has reigned so long in Western countries that it is ‘impossible to be racist to East Asians’..”

At the same time, it is important to remember that coronaracism is not confined to the Western countries of Europe and the US, where ‘the model minority’ stereotype was prevalent in the first place.

In India, News 18’s Rakhi Bose reports about a spike in social-media vitriol and physical attacks directed against members of the country’s national-minority communities from North-Eastern states, including Manipur, Arunachal Pradesh and the former Himalayan Kingdom of Sikkim, who have East Asian appearance.

Like in Europe, the current spike of racism against these communities is merely the tip of the iceberg. Since India’s independence, they have faced numerous systemic inequities, ranging from state services to economic opportunities.

“Ever since the murder of Nido Tania, a student from Arunachal Pradesh in Delhi’s Lajpat Nagar where he was beaten to death by seven men in 2014, the safety of the people from the northeast has been a burning issue,” emphasises Bose.

In Russia, the situation is similar. Members of the country’s native minorities, including Siberia’s Buryats and descendents of resettled Russian Koreans, report a dramatic increase in long-standing discrimination and hostility from fellow citizens (such as being called “Coronavirus” or pushed on public transport in White-majority cities) and the authorities (such as the intensification of arbitrary ID checks).

Lacking the basic legal protections afforded to Russia’s Asian and Yupik-Aleut citizens, Chinese and Central Asian non-citizens living in the country have faced altogether unprecedented levels of disruption to their lives.

Human Rights Watch connects their predicament to the “wave of insulting and racist commentary directed at Chinese people and natives of Central Asia on social media.”

But, mainstream media is likewise complicit in the rise of coronaracism around the world. Couch criticises “the pervasive use of no-context images of Asians by news outlets to illustrate their stories on the virus.”

At MDI, we have already highlighted how media normalise exclusionary stereotypes about COVID-19 by using images representing particular minorities. Even if unintentional, editors’ lack of awareness about the harm caused by their decisions reveals the racist history of systematic exclusion of certain minorities from decision-making roles in Western media.

Unlike mainstream media that are slow to change. Social media has also enabled some pushback and collective organising against coronaracism. Affected communities have social media to reclaim the space.

Hashtags, like #StopAAPIHate (AAPI stands for Asian American and Pacific Islander) and #StopAsianHate, have been used to share resources, experiences and support on social media platforms. High-profile individuals, like the American-Korean actor and producer Daniel Dae Kim, have used their significant following to raise awareness and fundraise for victims of anti-Asia violence.

“Social media attention was the first step in bringing awareness to what was happening in our communities and the #StopAsianHate movement. It helped create a necessary groundswell since one of the big issues was that there had been a widespread erasure of our stories in the mainstream. So it was important that we let people know that this cannot be ignored.”

It is clear that whilst anti-Asian is nothing new, the COVID-19 pandemic has caused a new wave of it, both online and offline. Social media companies need to update their hate speech policies to include coronaracism and to better support communities affected by anti-Asian hate. More resources and awareness are needed to expose and counter anti-Asian hate across the globe – this is not a new fight, but one that has the momentum now to create concrete change.