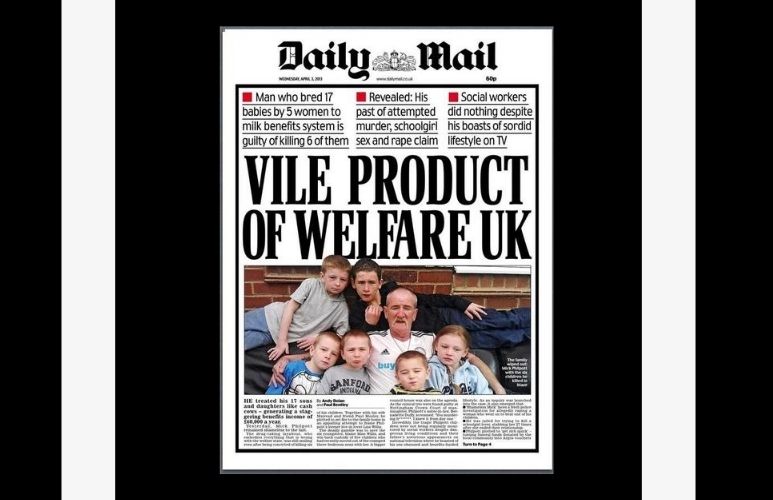 As the Media Has A Reckoning on Race and Gender, It’s Time To Also Talk About Class

How does the British media get away with such insulting representations of working class people?

It is 2008 and Britain is staring down the barrel of a global financial crash, bracing itself for a turbulent future. Welfare funding is being cut across the country, with ministers arguing that it is necessary to save the economy. For many of the millions who depend so heavily on these services to get by, the fear of not being able to survive is paralyzing.

Right on cue, Eden Lake is released in cinemas, a horror movie about a rich city couple on an idyllic getaway trip, who are then harassed, tortured, and eventually killed by a gang of hood-clad teenagers. It was described as “the best British horror movie in years,” kickstarting a genre of what is now known as ‘hoodie horror,’ a genre which more often than not taps into normalised middle-class fears about the ‘dangerous’ working class.

But this fear did not begin with Eden Lake, and media portrayals of the working class have long been overwhelmingly negative. British sociologist Stephanie Lawler argued in 2005, that ‘at the heart of middle-class identity, is a feeling of disgust towards working class existence,’ and this mentality is reflected in the media today.

Eden Lake set the tone for a decade of the media exploiting British class divisions, representing the poorest in society as mindless buffoons at best, and more often, as the true villains responsible for the state of the country.

Who are the working class?

Class representation in the media vary widely. Working class, the working poor and the unemployed are often conflated with each other on television and in the news. Despite the occasional ‘rags to riches’ storyline, most media representations of working-class communities tend to focus on what these communities lack—not just financially, but also in knowledge, taste and morality. They are constantly depicted as uneducated, poorly dressed and more likely to become criminals.

Before the Second World War, the working class were barely mentioned in British literature and media, despite being the largest social class for centuries. If it was represented at all, it was often as caricatures, such as Fagin in Oliver Twist. It received more attention following the Labour Party’s 1945 election victory, which passed social reforms in support of working people, but these portrayals became overwhelming negative with the rise of Thatcherism. As British historian David Kynaston puts it:

“The big shift in portrayal is surely that from about the 80s, it became possible in the media to, as it were, disparage the working class… in a disrespectful and wholly unkind way.”

Over the past two decades, working class people have been ridiculed as unintellectual, the butt of jokes in comedies such as Little Britain, demonised as ‘scroungers off the state’ and welfare leeches by the press, and as immoral, would-be criminals in film and television.

Laughing at the idiots

On being asked to explain the nature of British comedy, comedian Stephen Fry once commented:

“All the great British comic heroes are people who want life to be better and on whom life craps from a terrible height. They are not quite smart enough to wear a tie, as they are kind of lower-middle class. Their lack of dignity is embarrassing.”

British comedy loves the working-class. The 1970’s negative attitudes began to be reflected in some of the nation’s most loved shows. Monty Python, Shameless being two of them, while Little Britain invited its audiences to laugh at the lack of dignity, and intelligence of its characters.

One of Little Britain’s most popular characters, Vicky Pollard, was a physical embodiment of extreme views of working class people. Pollard is presented as a teenage single mum, who struggles to speak in full sentences, dresses unflatteringly in sports gear and is all-around incredibly stupid. She was incidentally played by the 30 year old male comedian Matt Lucas, whose schooling included fees of £10,000 a year—a far cry from the character he was trying to represent.

But if an argument could be made for satirical comedy, it is harder to defend television formats which are actually designed to humiliate the lives of the poor.

The Jeremy Kyle Show, a tabloid talk show which predominantly featured people from working class backgrounds confronting each other on personal issues, ran for seventeen seasons, fourteen years, and was watched on average by one million people per episode. It has long been criticised as a platform to humiliate poor and vulnerable people. Journalist Diyora Shadijanova said that its extreme popularity showed “just how comfortable our society has become with demonising the most vulnerable members of our society”.

Middle class comedy, and middle class comedians largely occupy the media landscape today, so it’s no surprise that the comedy on our screens still gets its kicks by ridiculing those beneath them. Television and film also has a distinctive lack of people with working class backgrounds in decision making positions, which likely explains the limited positive portrayals we get to see.

It is one thing to laugh at someone for their supposed lack of intelligence or dignity, but the financial crash presented the UK media with a much more insidious narrative to exploit.

Scroungers of the State

In the UK today, looking down on benefit claimants has been all but normalised. At a work gathering a few years ago, a colleague of mine expressed her disgust when recounting the story of a claimant who received more in benefits than she did from her salary after tax. If such a story was true, the criticism was not aimed towards a system which allowed such a thing, but at the person who would take advantage of it, compared to my ‘hardworking’ colleague: “it’s sick that some people would be okay with accepting that”.

Claims that millions are claimed by people fraudulently are also extremely common. A 2013 poll found that the average respondent believed that “41 per cent of the entire welfare budget goes on benefits to unemployed people, while the true figure is 3 per cent’”.  They also believed ‘27 per cent of the welfare budget is claimed fraudulently, while the government’s own figure is 0.7 per cent’, and that “42 percent of people thought that benefits are too generous.”

So where do such incorrect assumptions come from? Why are the poorest so often blamed for society’s problems? As people from a similar social position are much more likely to interact socially with each other than with members of other groups, these beliefs are most likely influenced by what they see in the media.

The word ‘scrounger’, was used on average 300 times a year between 1994 -2008 in UK newspapers. By 2012, the usage was up to nearly 4,000. During this time, The Sun launched a campaign asking readers to ‘Help us stop the £1.5 billion benefit scroungers’, The Sunday Times ran a piece titled ‘End the something for nothing culture’ and the Daily Mail frequently covered stories of working class couples demanding more benefit money to support their lavish unemployed lifestyles.

In 2012, the television show Benefits Street was released on Channel 4, attracting over five million viewers. The show documented the lives of several benefit claimants living in the outskirts of Birmingham who generally preferred to live off benefits then to seek employment. The show received an intense negative reaction, including a stream of online abuse against participants on Twitter, including death threats.

The poor are also often portrayed as criminals (another strain on taxpayers’ money). Fare Dodgers, a Channel 4 program which targets people who avoid paying for London transport, almost entirely identifies working class people as the show’s villains. There is no conversation on these people’s backgrounds, or reasons for avoiding paying, they are framed simply as the type of person most likely to commit the crime.

Afterall, it was Boris Johnson who wrote in The Spectator in 1995, that a blue collar man is “likely to be drunk, criminal, aimless, feckless and hopeless, and perhaps claiming to suffer from low self-esteem brought on by unemployment.” An astute description of the villains of Eden Lake.

The narrative of scroungers has been remarkably consistent in the 12 years since the financial crash (coinciding in Britain with a governing party ideologically hostile to the welfare state). The austerity period has undeniably shaped media discourse, presenting the poor as a burden on public finances and a justification for cuts, while there has been hardly any criticism of the financial elite who caused the 2008 crash in the first place.

As journalist Owen Jones says in the foreword to his book The Establishment, “it seems no accident that while Benefits Street graced Britain’s television screens, shows called Tax Dodgers or Bankers Street were conspicuously absent”.

The need for voices

The effects of these negative portrayals can be devastating. As a country, Britain’s social mobility is in decline, meaning that it is increasingly harder for individuals to break the boundary of their social class and get ahead. Julie Hulme, Head of News at the Joseph Rowntree Foundation, a charity which works at solving poverty in the UK, believes the media’s role in changing this decline is pivotal:

“The media has an important role in bringing people together and forging a shared understanding of the society we all live in” Hulme told Media Diversity Institute. “If you or your family are locked in poverty, portrayals that rely on stereotypes or sensationalism can add an extra barrier, blocking your route to a better life.”

For Hulme, this starts with the stories we are shown and consume taking working class communities into account.

“The voices heard in the media should reflect their audiences in terms of income, just as they should in terms of gender, race and age. Many news and media organisations cover these issues well but there is still more to do to ensure that people with experience of poverty are properly heard and represented.”

As the world reflects on institutionalised racism and gender in the media world, class remains a much less talked about topic, but the prejudice and bias are widespread, and deeply embedded into society’s collective psyche. Many working-class homes are loving, full of people proud of their identities and communities. Highlighting stereotypes and extremes tell viewers those homes do not matter. They do. And it’s time those stories are told in the mainstream.

The Joseph Rowntree Foundation run The Talking About Poverty project, which aims to build a network of people who are comfortable discussing their own experiences to ensure that media coverage is accurate, respectful and looks towards solutions.