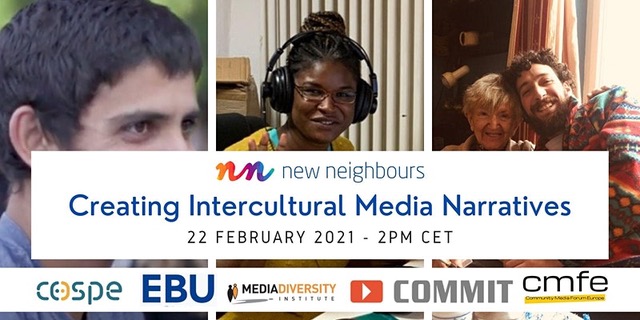 How do migration and the media connect? How can migrants, refugees and asylum seekers participate directly in European media productions? How can civil society organisations (CSOs) benefit from media training? These are the questions that the online webinar and final event, organised by New Neighbours, tried to address on 22 February.

How do migration and the media connect? How can migrants, refugees and asylum seekers participate directly in European media productions? How can civil society organisations (CSOs) benefit from media training? These are the questions that the online webinar and final event, organised by New Neighbours, tried to address on 22 February.

New Neighbours, a project funded by the European Union’s Asylum, Migration and Integration Fund, brought together public service media, community media and civil society organisations in order to ‘highlight the positive social and economic contributions made by migrants and refugees throughout communities across Europe’. The project was led by the European Broadcasting Union (EBU) which partnered with Media Diversity Institute, Community Media Forum Europe, COMMIT and COSPE Onlus in order to create a series of media productions and train CSOs in media advocacy. Despite the difficulties that COVID-19 created the final result was a unique amalgam of documentaries, online campaigns, community media productions and country reports and interviews that highlight migrants’ contributions to society.

The online webinar ‘Creating Intercultural Media Narratives’ dove deep into these productions and brought the protagonists to the fore. The result was a special event similar to a high-end TV production with a blend of video and live interviews that brought everyone together through EBU’s central offices in Brussels.

New Neighbours project coordinator Jeroen Depraeter kicked off the event by welcoming everyone and introducing the webinar’s programme.

“The audience knows that diversity, equity and inclusion is important it has for public service media; they are the heart of public service media. One of the core values of EBU is diversity (…) it makes sense to promote and invest in diversity in front and behind cameras. We feel quite strongly about projects like this,”  said Wouter Gekiere, EBU’s Head of Brussels Office.

“New Neighbours is produced again this year because of the success of all the NGOs; (we) decided to make a new series and still work together with all the NGOs. With the consortium (…) we decided to continue our collaboration and we have a new proposal called ‘New Voices’ with a focus on people who want to make a difference in the society,” continued Frans Jennekens, New Neighbours Executive Producer, NTR.

Indeed, the success of New Neighbours is unquestionable. The project’s website received 80,000 visits and its Twitter account 22,700 impressions, with people commenting that on how compelling the documentaries were and anticipating seeing all project productions.

Throughout the course of the webinar participants had the chance to watch clips from each production, hear from producers and protagonists and hear from each partner about their role in the productions.

Now: Rouby Baba-Traoré and Roufine Songue producers of Our Voice at Radio RDL, Freiburg. Rouby: “It was so difficult for me as a refugee journalist to find an internship, until I found RDL”

Now: For Amer Kassab 2020 was a devastating year which included the death of Eva Sternheim-Peters with whom he shared an apartment. Their story can be seen here: https://t.co/KgEkyXI1zN

Media Diversity Institute’s role in New Neighbours included training civil society organisations that work in the field of migration in media advocacy tools in order to learn how to best use the media to channel what they think is important. In addition MDI provided financial and professional support in developing campaigns. Those organisations went on producing successful campaigns.

“We have been very pleased that we had the opportunity to be part of this project for many reasons. For 20 years we’ve been pushing the media and civil society to collaborate. New Neighbours is the exact project that we enjoy working in,” said Milica Pesic, MDI’s Executive Director.

Milica Pesic was joined by Greta Wessing, co-chair of Refugee Law Clinic Berlin, Tea Vidović, migration expert at the Centre for Peace Studies (CPS), Zagreb, and Marco Farina, director of Human Rights Youth Organization (HRYO), Italy. Greta Wessing talked about their work on the Greek island of Samos and about the success of their campaign ‘I Have Rights’.

“With the help of MDI, we developed a website and a social media strategy that helps us report about our work. We have also created an online justice campaign that attracted the attention of traditional media,” she said during her presentation.

Greta Wessing: We make sure that the voices of asylum seekers are heard at the European Level. pic.twitter.com/phDN7mLVXI

Marco Farina, was behind the campaign ‘Olu Gi’ that used cartoons in order to fight stereotypes.

“During our campaign we saw that our followers were moderating hate speech. It was a very successful campaign,” he said.

Tea Vidović stressed the complexities that COVID-19 created which made them move from a traditional campaigning format to an online campaign, which turned out to become quite successful. #ovdježivimo (#welivehere)invited refugees in Croatia to talk about their lives after finding a safe place in Croatia, a country that has not received a large number of asylum seekers.

Now: Tea Vidović, migration expert at the Centre for Peace Studies (CPS), Zagreb. As part of this project they created the campaign ‘We Live Here’. “Due to Covid-19 we moved from the street to the monitor” For more see: https://t.co/9b5pVYnijF

The success of the online webinar ‘Creating Intercultural Media Narratives’ was a happy and satisfying result for all those who dedicated large parts of their work for the past two years. Collaborations and productions such as those that were created through New Neighbours may seem complex but the project proved they are not impossible. Migrant stories are important and putting migrants at the centre of their stories can create new networks and created bridges that seemed impossible in the past.