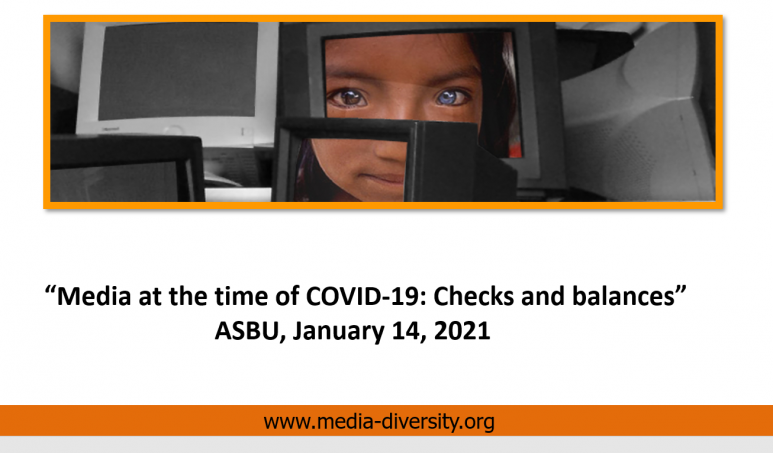 The consequences of COVID-19 and the global pandemic have spread through every aspect of people’s live: personal and professional. Media around the world did not remain unaffected. That was the topic of the 40th ordinary session of the Arab States Broadcasting Union (ASBU) General Assembly which gathered some 100 of its their members and associates from Africa, Europe and Asia,  most of them identifying themselves as public service media . MDI, represented by our Executive Director Milica Pesic, took part in the professional discussion titled ‘Media in the time of COVID-19 pandemic: checks and balances’ on 14 January 2021 along with other international experts and media professionals and specialised organisations.

‘It’s the role of public service media to inform and do fact-checks. We cannot run away from it’,  said  Philomena Gnanapragasam, Director of Asia-Pacific Institute for Broadcasting Development (AIBD)

‘The media is a public good and as such they should be fair, balanced, accurate and inclusive. But the pandemic has confirmed that it’s only the ‘fourth estate’ /pillar of democracy’, said the MDI representative. In addition, the pandemic highlighted the differences between conventional media and social media where there is more hatred and they are less controlled. At the same time the trust in news media is eroding with figures suggesting that less people trust the media than before. 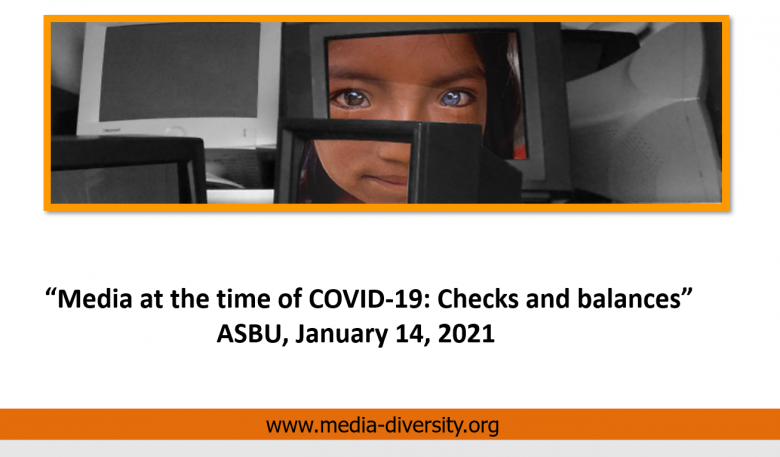 During the current pandemic there are two challenges for the media: increased hatred with the form of populism, nativism, a glowing far right and the spread of conspiracy theories that creates a ‘tsunami of hate speech’. This is the result of more partisanship and polarisation in the news media. The second challenge is dis/mis/malformation, the rise of fake news as well as the widespread use of deepfake visuals within conventional media.

The participants agreed that the media’s main responsibilities are to provide accurate information and raise awareness to and for the people they serve, particularly during crises such as the pandemic. ‘Unfortunately’, said Pesic, ‘that’s exactly what we have been missing during this crisis. English COVID rules have changed 64 times so far! Yet, the motto ‘we are all in this together’ does not work.’ Minorities are being targeted by non-ethical media. UK data shows that the Black and Ethnic Minority communities community are 30% more affected by COVID-19 than the white people, and similar is with those living in poverty, disabled people, refugees and asylum seekers. Similar situation is in many European countries.  A recent EU study confirmed that media across the continent still show how gendered disinformation during the pandemic has been: there is widespread misogyny and misinformation around gender; women are either represented as enemies and/or as victims; female politicians are presented as incapable of prioritising their policies.

The participants have been informed about the Media Diversity institute’s latest report on the way the QAnon theories spread on Twitter.  “Sadly, QAnon-friendly media shame Muslims for failing to adhere on lockdown measures and spread antisemetic global conspiracies that draw upon historical prejudices and racist perceptions”.