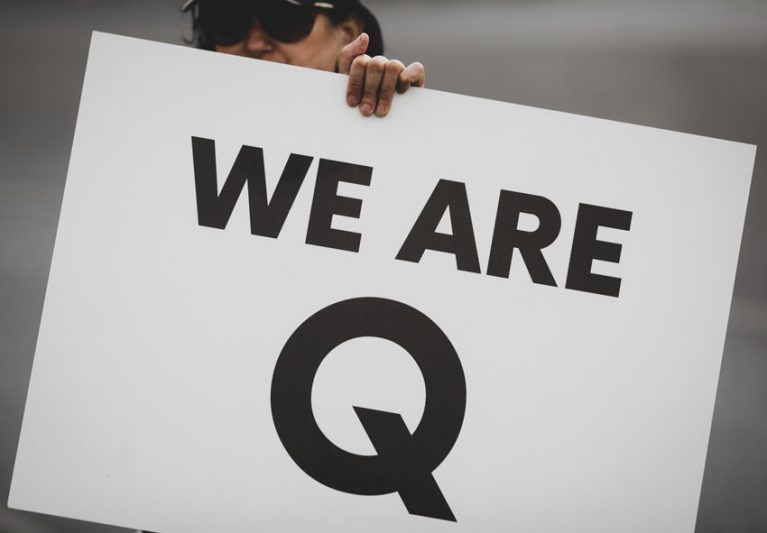 How Does the QAnon Conspiracy Theory Spread Online?

Evidence for the escalation of QAnon comes from the messages left by some its supporters, which have been written in languages other than English.

With fake news trolling the Internet and various social media platforms, it can be difficult to track down who exactly is behind the virus that continues to push people into a world of lies and deceit. Well, it is safe to say that among the list of suspects, we can now add a new group of people to the list: the QAnon supporters.

According to a report compiled by the Media Diversity Institute and partners’ project Get The Trolls Out! in June 2020, QAnon is a conspiracy theory that emerged with the appearance of an anonymous individual labeled ‘Q’ on the platform 4chan in 2017. ‘Q’ is famous for establishing himself as a government insider who had top access to all of the secrets in the White House and would often describe a secret “power struggle” that involved Donald Trump and his colleagues. He was a pro-Trump and anti-state idealist who had spread his influence through clues and messages that he would leave on 4chan, and that itself had led to the creation of a whole community of supporters. 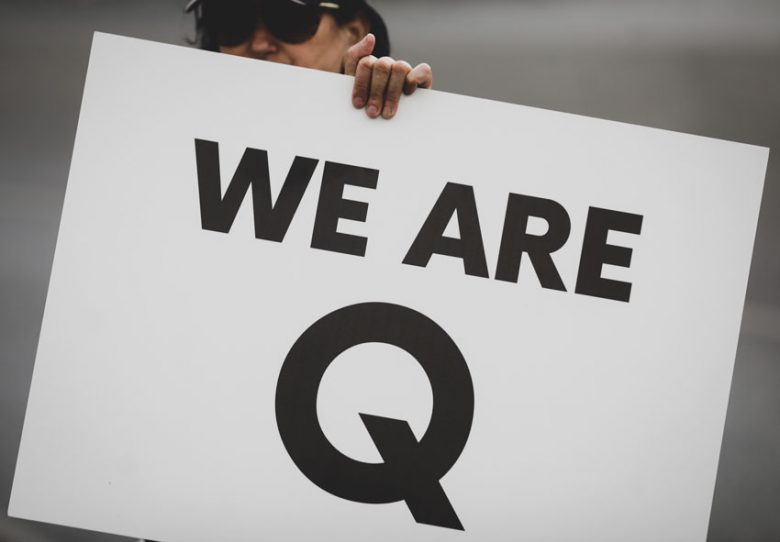 There are several key elements that define the QAnon community. First, all QAnon supporters believe that “deep state,” or in other words the evil global elites, are trying to take down Trump. Although it is not clear who these global elites are, the supporters believe that Trump is the only chance at defeating them and should have all the power since he is the only “hope” for the people.

Secondly, they believe that the deep state is running a child trafficking ring underground. Images and video clips have circulated around the community showing gory scenes of children being sexually exploited at the hands of the elites, but these images are fabricated.

With regards to the COVID-19 pandemic, QAnon supporters do not believe it exists. They question any information given by healthcare workers and have spread messages saying that the vaccine is fake. More importantly, they believe that the lockdown initiated by global leaders is just a way for them to retain control over the people.

Although QAnon started out as an American-based conspiracy theory, its influence has spread to many different countries around the world, including Belgium, the Netherlands, France, Canada, Germany, and Greece. Evidence for the escalation of QAnon comes from the messages left by some its supporters, which have been written in languages other than English.

So far, researchers who are part of GTTO have found hashtags that have appeared in content posted by groups, external websites, and accounts related to QAnon. A second report ‘QAnon 2 – Spreading Conspiracy Theories on Twitter’ that was produced through the project Get the Trolls Out! in collaboration with TextGain used Artificial Intelligence methodologies in order to explore Twitter’s role in spreading conspiracy theories related to QAnon. The report looked at over 50,000 hashtags including the most frequent ones: #MAGA, #COVID19, #SOROS, #PROUDBOYS, #AGENDA21, #QANON. According to the report “The subset of tweets posted by identified QAnon profiles contains about 3,000 different hashtags, where #MAGA, #QANON, #AGENDA21, #PLANDEMIC and #GODWINS occur most often”.

In the second report, researchers have also conducted analyses of tweets that included these hashtags as well as QAnon related content ahead of the 2020 presidential election to capture QAnon’s migration as a US-based conspiracy theory to a European-based conspiracy theory. They have found 1,250 profiles on Twitter related to QAnon worldwide exhibiting an alarming level of antisemitism. In fact, 20% of the far-right tweets have targeted Jewish elites and their hordes of immigrants to replace white people and install the New World Order (NWO). There is little doubt that the users have been encouraged by Trump’s profile to promote QAnon content.

Additionally, through the monitoring of QAnon content, researchers of both reports have discovered that supporters have utilized antisemitic dog whistling, which means that they have repeatedly referenced terms, narratives, and people that may appear harmless without context, but are actually a form of hate speech targeting Jewish people.

In Belgium, supporters have created a few pages online dedicated to QAnon theories, including 17FR which is a private Facebook group with approximately 22,434 members with content in French. The group also has a Twitter account with links in its bio to duplicated content in case the Facebook page gets taken down. Two other Facebook pages include Le Grand Reveil #QAnon and Q-ANON ET AUTRES SOURCES D’INFO, which both have more than 2,000 members and are growing in number.

Researchers have figured out that one specific tactic used by QAnon supporters are the release of videos and “documentaries” to spread awareness on the conspiracy theory. What is interesting to note is that often in these clips, there are references to well-known figures, with one being philanthropist and billionaire investor George Soros. QAnon supporters have repeatedly mentioned how Soros is deeply involved in the “evil project of billionaires” and are “exploiters of the pandemic” who own COVID-19 patents that were used to create the disease.

QAnon-related content in France is best seen through two websites: conseilnational.tv and joyinliberty.org. The first website spreads conspiracy-based ideas to the public in an effort to “liberate” the country. For instance, some supporters have included information on how the government is imposing quarantine to the public in an effort to install 5G towers that would pose a risk to human health and create vaccines that could control human life.

The latter website provides a QAnon map to help find supporters who believe in the conspiracy theory. The people on that website describe themselves as “anonymous patriots whose mission is to teach the world to think freely and discover true liberty.” Their whole mindset revolves around the fact that they need to “save” the country and they have used that claim as justification for spreading dangerous misinformation.

While these are just a few of the prominent occurrences of QAnon taking place in the European countries, researchers from the GTTO project are working on uncovering more evidence with time.

For more information on QAnon and Media Diversity’s work on conspiracy theories visit our project Get the Trolls Out!

QANON and the Growing Conspiracy Theory Trend on Social Media