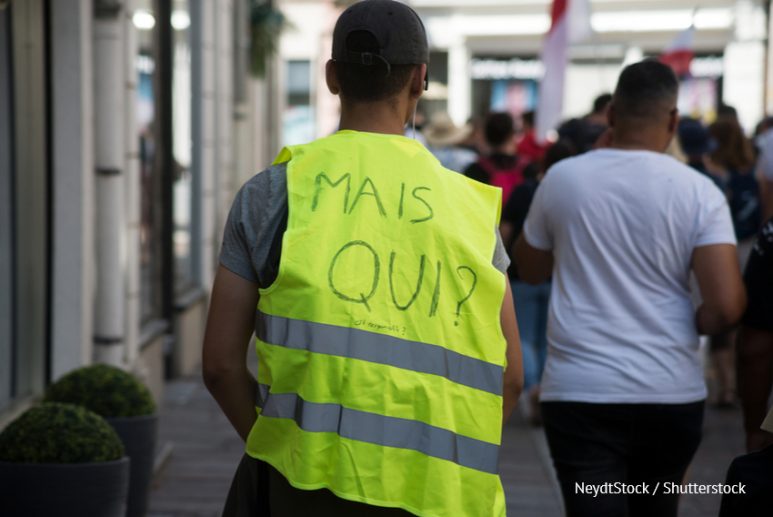 How Qui? (Who?) became the new antisemitic slogan of the far right and conspiracy theorists in France

Antisemitic conspiracy narratives are flaring up in France, finding fertile ground in street demonstrations and online discussions against vaccination and the coronavirus health pass.

This article initially appeared on Get The Trolls Out! Dig Deeper series.

Antisemitic conspiracy narratives are flaring up in France, finding fertile ground in street demonstrations and online discussions against vaccination and the coronavirus health pass. While the reasons for refusing the vaccine and for opposing the health pass are varied and cannot be labelled as just and only conspiracy theories, antisemitic incidents by anti-vaccination activists have been increasingly worrying Jewish groups, anti-racism campaigners and authorities. In the past few weeks, some French anti-passers have expressed antisemitic sentiments and conspiracy ideologies under a new slogan “qui?”, a veiled accusation that the pandemic is being orchestrated by Jews. But what exactly does this slogan mean and where does it come from? 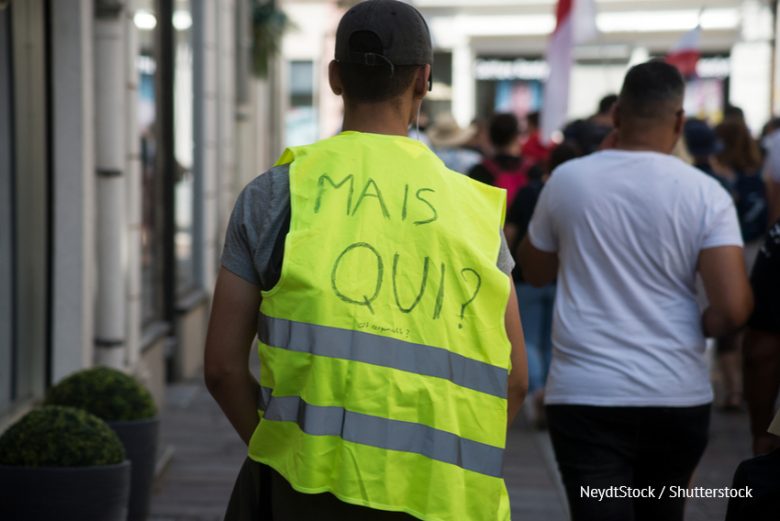 To understand this slogan, and the intensification of antisemitism during the pandemic, we have to put it in context. A recurring theme in the protests has been the comparison of the unvaccinated to Jews who were persecuted by Nazi Germany during World War II. Yellow stars have been worn by protesters in France, as well as in other major cities in Europe, to denounce the creation of a two-tiered society and the loss of freedom in a “health dictatorship”. The badge was used to identify Jewish people to segregate them, discriminate against them, and make deportation to camps easier. Saying that those who refuse to be vaccinated are facing the same oppression as Jews did in the 1940s is grossly inaccurate and offensive towards Jewish people.

Antisemitic expressions among anti-vaccine protesters are not limited to the trivialisation of the horrors of the Holocaust. Since the beginning of the pandemic, conspiracy narratives have falsely accused Jewish people of being responsible for the circulation of the virus and for engineering the vaccine to control the global population. For example, the recent antisemitic slogan “Holocough”, which has its roots in the historical practice of blaming Jews for spreading disease and, at the same time, of considering Jews expendable victims, has been employed with different meanings. It has been used as a call to spread coronavirus to Jewish people to infect and kill them, to suggest that both the Holocaust and coronavirus are fabricated, to claim that COVID-19 restrictions are a plan by the “deep state” to implement a Holocaust-like system, and to indicate that the pandemic has been invented by a Jewish elite for profit and population control.

Throughout history Jews have been falsely accused of deliberately spreading death and disease, from poisoning wells, to causing the Black Death. Drawing from these same centuries-old conspiracies, on 7 August, Cassandre Fristot, teacher and former member of the far-right National Rally party, marched during an anti-pass demonstration in the eastern town of Metz waving a placard with the words “Mais qui?” (But who?). The sign included two diabolic horns drawn, followed by a list of French and international Jewish public figures and the word “traitors!”. Fristot was suspended from her job and put under investigation. Under accusation of seeking to incite racial hatred, she will go on trial in September. If convicted, she might face a one-year jail sentence and a fine of up to €45,000 (£38,000).

The question “But who?” was a reference to an interview with retired army general Dominique Delawarde broadcast on CNEWS in June. During this interview, Delawarde hinted that a specific group controls the media and, when the journalist asked him who he was referring to, he answered “the community you know well”. Without saying it explicitly, the former general accused Jewish people of dominating the media sector. This is a common antisemitic conspiracy narrative that has been emboldened by the “The Protocols of the Learned Elders of Zion”, a proven forgery from the late 19th century which is still regarded by some as a real document. Delawarde, who is now facing criminal charges for his antisemitic comments, was one of the authors of a public letter threatening the French government of a military coup if it failed to address the “disintegration” of the country as a result of “Islamism”, “suburban hordes” and “certain forms of anti-racism”.

Cassandre Fristot has not been the only one to use the slogan “qui?”. Before and after her case was picked up by the media, banners displaying the same antisemitic question had appeared on the Saturday marches against the health pass in France. Similarly, on social media this slogan is shared in posts with antisemitic conspiracy narratives claiming that Jews are in control of key sectors and manipulate governments and people to their own gain. These age-old tropes have promptly adapted to the new circumstances of a global pandemic and went on to blame Jewish people of exploiting and harming the public to profit from the virus. Among the countless tweets with the hashtag #qui, many display photos of heads of pharmaceutical companies developing the vaccine. While it is true that, for example, Pfizer CEO Albert Bourla is Jewish and is the son of Holocaust survivors, and that Moderna’s chief medical officer Tal Zaks is Jewish and from Israel, false ideologies see this as a proof of a secret Jewish conspiracy to rule the world.

These posts and placards fit within a much wider antisemitic fabric that the pandemic, and the strong reactions to covid-19 restrictions, have made more visible. In August, France registered multiple reports of antisemitic incidents within the Get The Trolls Out! project, often linked with the coronavirus and vaccination. In addition to the yellow stars and numbers on the forearms worn by some anti-pass protestors, Stars of David have been painted on vaccination centres, quenelles (the inverted Nazi salute gesture invented by Dieudonné) are performed during marches, and a stone memorial commemorating the life of the Holocaust survivor and former health minister Simone Veil has been vandalised with swastikas.

Anti-racist organisations are alarmed and keep denouncing these manifestations of antisemitism. Delawarde and Fristot are now facing trials for inciting hatred, joining others, such as Dieudonné and Alain Soral, who have been convicted over the past few years. While fines might not change the opinion of staunch antisemites, the content they produce is also removed from the internet – a small step to prevent the further diffusion of conspiracy narratives and the normalisation of antisemitism.