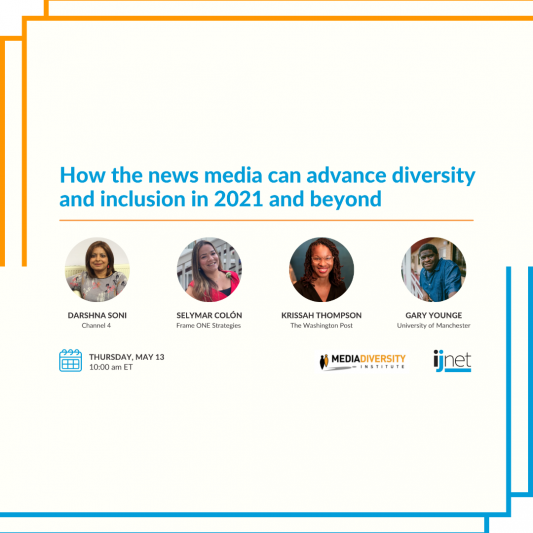 After a turbulent year of protests in the wake of George Floyd’s murder, the US and UK media industries have had to re-evaluate their approach to diversity and racism.

After a turbulent year of protests in the wake of George Floyd’s murder, the US and UK media industries have had to re-evaluate their approach to diversity and racism. Not only have certain harmful and misguided approaches to reporting race been called into question, but a deeper examination of diversity in the newsroom is now underway. Together with IJNet, Media Diversity Institute hosted a webinar to looking to centre these issues and platform discussion reflecting on the past year and looking to the future.

The event ran on 13th May 2021 as a zoom webinar, but was also hosted live on IJNet’s Facebook. Moderated by Gary Younge, former US-based correspondent for the Guardian and award-winning author, broadcaster and professor of sociology at the University of Manchester, the panel was formed by Darshna Soni, Home Affairs Correspondent at Channel 4 News; Selymar Colón, President and editor in chief of Frame ONE Strategies and co-founder of Diversifying Journalism; and Krissah Thomson, Managing Editor of Diversity and Inclusion at the Washington Post.

Beginning with a reflection on the panellists’ experiences of the past year, Younge acknowledged that a sense of ignorance and urgency had been unveiled, while Soni shared that the situation felt ‘more hopeful than it ever has before’. The panel foregrounded discussions about the cycle of social activism, recruitment and nurturing of talent, while celebrating the moment as a window of opportunity for progress that should not be overlooked. 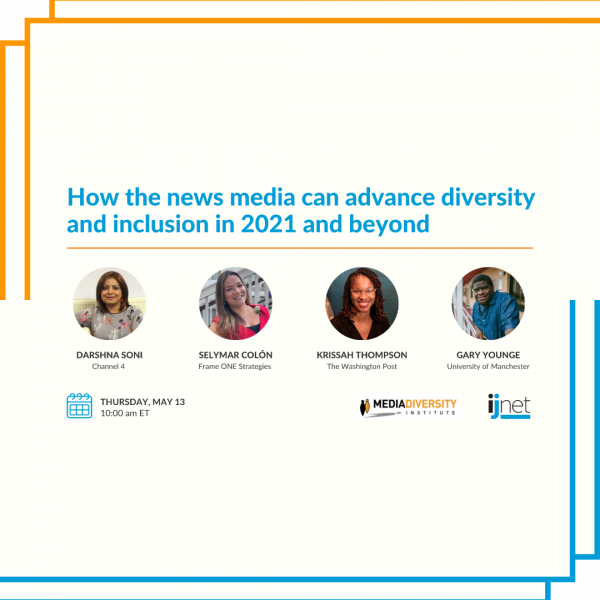 Discussion also centred the importance of cognitive diversity in the workplace, emphasising the importance of monitoring not just the presence but also the position held by people of colour in the newsroom. Social media was credited with making the world of journalism increasingly difficult to navigate, as the racist abuse received is difficult to avoid when online platforms have become such an integral part of journalism and investigation.

Looking at more positive change from the past year, Thomson said that the growth in appreciation for the expertise of journalists who were able to write about race well was encouraging, while Soni complimented the choice to record the ethnicity and gender of all programme contributors. She pointed out that with the support of data and numbers, things that were once overlooked could no longer be disregarded by the organisation.

Audience questions also encouraged vibrant discussion. Colón emphasised the importance of collaboration in response to a question about the remit of reporters, all panellists spoke in favour of carving out your own niche as a reporter.

Turning to the future, the priority for all was ensuring that action was taken. Closing the panel, Younge said: ‘we need brave people of action’ in order to leave news organisations in a better position that we found them, urging the audience to ‘just do it’.