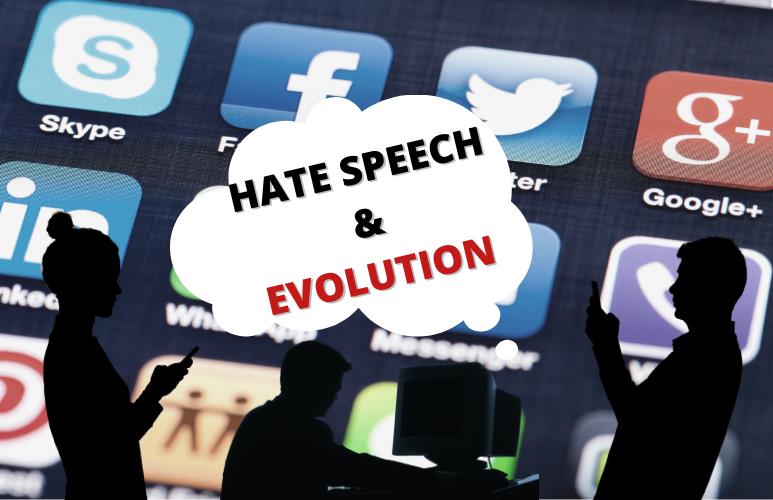 Is Hate and Prejudice In Our DNA?

We need to learn how to acknowledge our evolutionary roots while building a better world.

“Hate Speech” is a problem that sparks heated debates around whether or not freedom of speech is more important than the right not to be discriminated. Politicians argue constantly about where to draw the line between censorship and protecting vulnerable groups that are often the victims of these attacks. We often hear that our political divisions have never been wider. While the “us vs. them” wars rage on our televisions, the internet and on the streets, it is easy to feel that hate is more pervasive than ever. But is it? A quick look at the works of evolutionary psychology concerning hate offers an interesting perspective.

There is a debate over the very definition of hate speech. Some messages like “gas the Jews” are clearly hateful, while others—such as “our country has no room for immigrants”–are more difficult to categorize. Sometimes political movements—from “Black Lives Matter” to “Make America Great Again” are branded as hate, depending on one’s perspective. In principle, hate speech is an expression of prejudice towards others—and while we seem to see it a lot recently, it is not a new phenomenon at all. Rather, it is older than humanity itself and our species arguably would never have been able to build a civilization without it.

It all started when animals began to form social groups and social hierarchies. Our ancestors’ tribes could reach as many as 150 members, and their lives were largely dictated by the availability of resources, which shaped many social interactions. In many ways, this tribal culture came with many benefits; it makes members safer from external threat and provides more resources through cooperation which supports the community. However, communal living also comes with its own set of risks. It requires high levels of trust, since every day you might wake up with a stone knife in your back and your berries taken away. Even if a social group of primates sticks together without hostility, social hierarchies bring severe stress and misery upon those to those who are lower on the social ladder. As a result, our ancestors had to evolve mechanisms that would make their groups cohesive, close-knit and trustworthy. Our empathy gave us the means to feel others’ emotions and care for their well-being. Gossiping helped us exchange information about those who were breaking the norms of our groups, and make decisions to ostracize them. Thanks to these interpersonal bonds, our hunter-gatherer ancestors could fell mammoths together and not be afraid that after the hunt their friends will steal the loot and run away. Researchers believe that these evolutionary processes made us cooperative, altruistic and empathic. However, there is a dark side to this story and it is essential to understanding hate speech today.

Bonding with the members of our own groups inevitably came at a cost of developing prejudice against others. While empathy and trust kept our groups bonded, there was nothing to keep us from murdering members of other groups, in order to steal their resources. On the contrary, evolution favours such behaviour, as survival is key to passing on your genes, and creating a lineage. Due to the science of genetics and the practical benefits of the spoils of war, these aggressive genes prevailed over others.

But what about empathy? Isn’t that enough to prevent hostility against other humans? Most look the same as us, after all. It is a valid point—and evolution had to work around it, creating prejudice and hatred towards those who are not in our group for our own survival. In other words, we are genetically predisposed towards dividing ourselves into tribes of “us” versus “them.”

In many experiments, researchers have shown that humans constantly update and revise their understanding of who is “us” and who is “them.” We are not carrying a constant membership list for our given group in our head, but instead we are adapting to the circumstances, using our instincts for insider favouritism and outsider prejudice to our advantage. For example, in one study researchers made one group of participants wear red T-shirts and another group wear yellow T-shirts. Once they were wearing their uniforms, participants performed tasks that had absolutely nothing to do with their T-shirt colour and were not even group tasks. Nevertheless, the participants exhibited more favourable opinions of other people who wore the same shirt colour as they did. When the same experiment was performed on school children, they spontaneously gravitated towards others who were wearing the same colour, forming predictably prejudiced opinions about those who wore a different colour. Clearly, our brains are extremely sensitive to any signs of being “different” or from “another group” to prepare us for possible conflicts.

For our ancestors, defending the group from aggressive outsiders was primarily the domain of male species. As a result, men are more prone to forming prejudice against outsiders—a result of baring the weight of violence on their shoulders and using hate to protect themselves from the trauma of this violence. We can see this phenomenon playing out now, in the higher numbers of men in extremist organizations, such as militant Jihadist and white supremacist groups. Of course, the actions of these groups are reprehensible—but it would serve us well to examine their roots in evolutionary mechanism that were meant to protect social groups.

One of the ways in which humans develop their hatred for outsiders is through a phenomenon known as the “out-group homogeneity effect.” In other words, we tend to see the members of other groups as more similar to each other than the members of our own group, making it easier to associate them with negative qualities. In practice, this results in over exaggerated, negative totems of whole groups of people, like the money-grabbing, power-hungry Jews, criminal refugees or thieving Poles. By appreciating subtle differences between members of our own group we are better able to empathize with one another and build bonds, all the while lumping strangers together in a timeless iteration of “us” vs “them.” To be able to identify with our own group we need a clear boundary of who cannot be a part of it. What we are cannot exist without being diametrically opposed to what we are not; as psychologists Henri Tajfel and Joseph Forgas said: “We are what we are because they are not what we are.”

Most importantly, we see “us” as superior to “them.” This mechanism is strong enough that we clearly see its influence on our language. For example, the Kung San of the Kalahari call themselves with a word that translates to: “real people” and the word for “bad” is synonymous with the word for “foreign.” What started out as perceived superiority of one’s own tribe expanded across history, and evolved into ethnocentrism across cultures. It starts young; children exhibit preference for their own nationality around the age of six, and are able to comprehend the concept of “nationality” well before they reach that age.

In our past, the boundaries between tribes and societies were strengthened by cultural and linguistic differences. Language barriers facilitate “othering”—with examples from the old Polish language where the word for “Germans” meant “mute people” and the word for “Slavs” meant “those who use words.” However, when this barrier is bridged so are the chances that someone will see someone who shares a common tongue as part of their group, with research showing that people act on their prejudice much more often if the person they are discriminating against is not around. Being in the same room with the object of prejudice significantly decreases the chances that someone will engage in hateful acts, making anonymity the greatest ally of discrimination. As such, the advent of the Internet allows us to detach ourselves from the person we are communicating with, bury our empathy while enabling us to hide behind our screens and write hateful comments towards a dehumanised group of people that we “hate.”

However, evolutionary psychology would never state that every person hates everyone from other groups. We can clearly see that some people fall into hate more easily while others gravitate towards actively fighting prejudice and discrimination. Evolutionary psychology states that every person in every culture is born with innate mechanisms that make them capable of hatred and prejudice. Nature made us ready to hate our enemy if need be and equipped us with the tools to identify who is an enemy and who is a friend. Some express these evolutionary characteristics more than others; but the true challenge is how to build a better world without our primal instincts getting in the way.