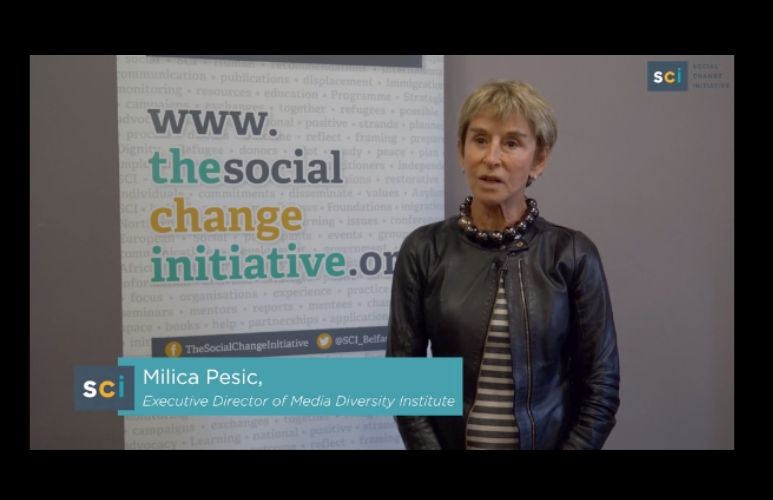 A conference from last year has relevant lessons for today.

Over the past year, it has become even more apparent how much the media can have an impact on deeply divided communities. However, many of the answers going forward can also be found in how conflicts were treated in the past, the Social Change Initiative in Belfast reminds us.

“We have to try not to do harm—it is not easy, but it is not rocket science either,” said Media Diversity Institute (MDI) Executive Director Milica Pesic at last year’s Social Change Initiative (SCI) conference in Belfast, which brought together journalists from South Africa, Colombia, Myanmar, Rwanda Turkey, the Middle East, the Balkans, Kashmir, Syria, Nepal and Northern Ireland to discuss the impact of media on creating social cohesion and pluralistic societies.

Now, many of the videos which discuss everything from how the media treats people from deprived communities to the lack of ethnic diversity amongst news reporters are more important than ever as we reflect on the ways that the COVID-19 pandemic has revealed the cracks in funding models of journalism and the #BlackLivesMatter movement calls on journalism and many other institutions to do a better job at standing up for diversity in the long-term.

“The media in Northern Ireland is not truly reflective of all of our communities,” said Ivy Goddard, the Project Director of the Interethnic Forum. “The only time we are called is when there is a race hate crime—but other than that it is as if the ethnic minority opinion does not matter.”

At Media Diversity Institute, we champion diversity because it is what makes or breaks whether or not a story is reported in a way that accurately reflects all of society, potentially informing everything from policy decisions to how history is recorded.

“We need impartiality yes, but inclusion as well,” Pesic continues, adding that the importance of diversity extends to sources, as well. “You don’t go for extremes when you do your stories, there are many gray areas. There are many views, and they all have to be included in your stories.”

Click here to check out some of the Social Change Initiative’s excellent resources on media and divided societies.