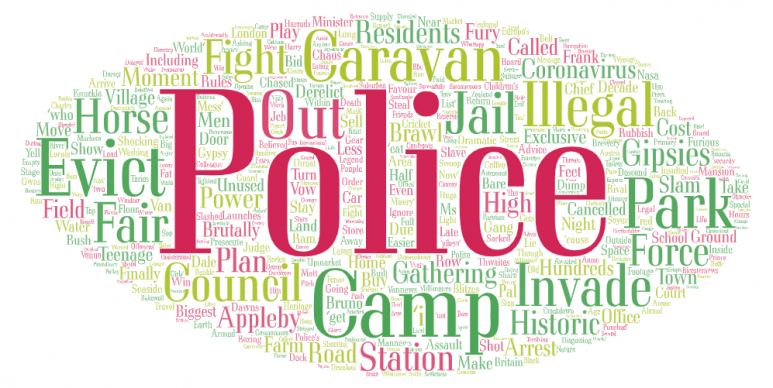 What Do English Headlines Reveal about Media Reporting on Travellers?

Nearly half of all online articles about Travellers in the English regional press contain ill-favoured words in their headlines, new analysis reveals.

If you wanted to learn about who Gypsy, Roma and Traveller (GRT) peoples are and their traditions and customs, a brief look at The Traveller Movement’s website would tell you much of what you needed to know. You would find that the GRT umbrella term broadly describes anyone in the UK of Romany Gypsy or Irish Traveller heritage, as well as English, Scottish and Welsh Travellers. It could refer to people living on barges and Show People, or simply those who have sought a nomadic way of life. You would find that they can live permanently ‘on the road’; be travelling at certain times of year and stationary at other times; live in bricks and mortar at all times or a combination of all three. You would find that these communities have a rich cultural heritage that have honoured the values of nomadism in the British Isles for more than half a millennium.

If you were to find answers in swathes of the English press, on the other hand, you may find a different story, one that portrays Gypsies and Travellers almost exclusively as groups of unwanted nomads who turn up to public spaces only to leave litter and terrorise the local settled population – just like the scenes in parks across England a fortnight ago, only they were caused by the sun coming out. 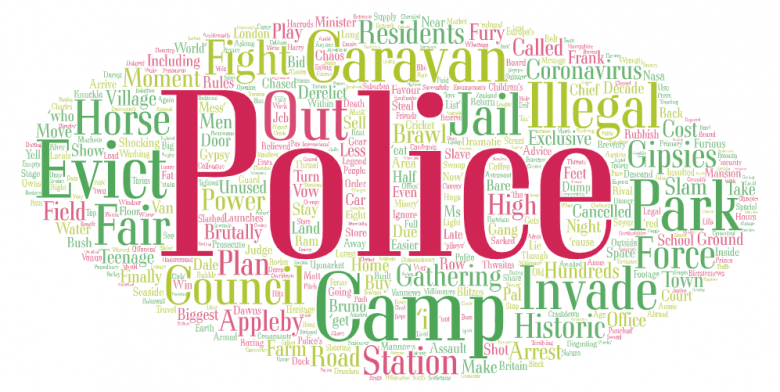 Many consider the media to have misreported GRT communities for years. Indeed, recent analysis of the first ten pages of results for the google search term “Travellers” across a broad selection of regional English newspapers found that nearly half of all articles contained negative words such as “illegal”, “violence” and “terrorise” in the headline. In some outlets, nearly two thirds of almost 100 articles painted Travellers in a negative light.

A great deal of aversion towards Travellers comes from reports of anti-social behaviour towards other members of the local community, yet the substance of numerous articles is little more than reporting a newly established unauthorised encampment – a plot of undesignated land occupied by Gypsies or Travellers. Naturally, national newspapers are less interested in covering stories from these local angles, and just over a third of all stories about Travellers in 12 national newspapers were negative. Nevertheless, some papers still managed to put ill-favoured words in the headlines of almost 70% of their articles about Travellers.

Sherrie Smith, a Romany researcher who campaigns to improve access to higher education for GRT students, grew up being called “scum” and “filth,” and has grown somewhat accustomed to hostility. “It doesn’t shock me at all,” Smith says of the latest figures.

Smith is one of many Gypsy and Traveller activists disheartened with what is perceived as undisguised racism towards their communities. She maintains that Gypsies and Travellers receive media treatment unmatched by any other ethinic minority. “For a start, they very rarely use a capital ‘G’ or capital ‘T’, which we’re entitled to [as] ethnic minorities… that’s to trivialise us,” she continues.

Speaking about this discrepancy, Smith alleges it is down to slapdash reporting of GRT stories. Not only is the liberal use of the term “Traveller” less likely to see a newspaper face accusations of hate crimes – Irish Traveller and Romany Gypsy are protected characteristics – but it is also simply down to a lack of background research; that journalists often don’t know whether they’re reporting on Irish Travellers, Gypsies, New Travellers or otherwise. Many agree with Smith that it is lazy and dismissive reporting:

“It’s an absolute joke that they lump us together,” she says. “We speak a different language, have different history, different culture.”

The inaccuracies in reporting go further, and Smith is certainly one to know. She recently attended a large funeral that was picked up by the national press, who shared pictures of the ceremony, claiming underage drinking took place and that attendees were drunk and disorderly. But Smith says that this is wrong, since, unlike at an Irish Traveller wake where drinking traditionally forms part of the celebration of someone’s life, alcohol is rarely part of Romany funerals. “This rarely happens… from the minute they die until after they’re buried, traditionally we don’t drink or cook. We are different cultures with different traditions.”

It would seem that everything the public knows about Gypsy and Traveller culture is either a damaging stereotype or plain wrong. This is unsurprising, activists say, when material on the school curriculum about GRT communities is so scarce. “The only place you can find out about us is in the media,” Smith says. As part of her job, she regularly trains statutory services on how to approach sensitive issues involving Gypsies and Travellers. The role can be demoralising when she is met with social workers, police officers and other professionals who have never been taught about her community. “[They] know more about witches and fairies” than they do about Gypsies and Travellers, she complains.

What can feel like a constant onslaught of frenzied accusations from the media can take its toll. “The effects play out in every aspect of our lives,” Smith says, from access to healthcare to high rates of suicide. Most socio-economic indicators, including prison populations and illiteracy rates, show that, across the board, Gypsies and Travellers fare worst in the country in life opportunities.

Smith firmly believes that education is at the heart of combating the negative media portrayals of GRT communities. Surveying a police force’s unconscious bias towards Gypsies and Travellers, for example, “there was definitely an attitudinal change” after officers spoke directly with members of the communities themselves. Incidentally, over 90% of police bodies have rejected the necessity of the police, crime, sentencing and courts bill, which, at best, would inevitably see the number of imprisoned Gypsies and Travellers surge.

As well as changing the attitudes of powerful institutions, Smith works with universities to improve their outreach to GRT communities, in a pledge to increase their uptake of Gypsy and Traveller students. A more diverse cohort of lawyers, social workers and doctors will be crucial to dismantling structural racism, she says. Smith’s own daughters are helping shape this new landscape in higher education, with one studying for a degree in journalism, whilst the other is training to become a social worker.

As for the media, Smith believes it is their responsibility to re-shape the narrative. The statistics show the scale of this task, particularly at those papers where more than two thirds of all content about Travellers reports stories about crime and anti-social behaviour.

Some newsrooms are making efforts to bring about this development through GRT cultural awareness courses. Amongst the many possible outcomes of attitudinal change, Smith hopes to see a rise in positive reporting. Like many, she is optimistic that there will be an appetite for good news stories following the pandemic.

Photo Description: Some of the most frequently-occuring words used in headlines for articles about Travellers. The word “Gipsies” occurs regularly in headlines about Travellers, despite Romany Gypsy being a distinct ethnic group from many Traveller groups. In much of Europe, “Gypsy” is considered an ethnic slur. Produced in wordart.com.