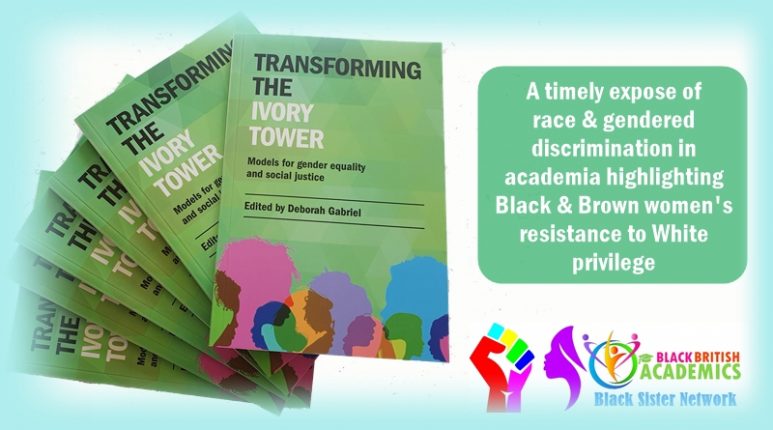 A book, that for Black academics, feels like home.

Transforming the Ivory Tower: Models for Gender Equality and Social Justice edited by Dr Deborah Gabriel reveals the systemic racism and sexism that many Black academics endure as they navigate the aptly-named “ivory tower.”

In keeping with the revolutionary Black Feminist tradition of embodied grassroots theorising, pioneered by bell hooks and Audrey Lorde, the contributors share their own experiences to build a collective feminist toolkit for survival inside the racist-sexist academy. In Part One, different women of colour share personal accounts of surviving in the academy. Dr Gabriel’s own experiences of teaching media and PR at University of Bournemouth opens this section. Chapter Two – co-written by Dr Deborah N. Brewis, Dr Sadhvi Dar, Dr Angela Martinez Dy, Dr Helena Liu, Dr Udeni Salmon of the Building Anti-Racist Classroom (BARC) Collective – recounts the experiences of these Business and Management lecturers and researchers based at universities all over the world that led them to start this Collective in order to address the urgent need for intersectional approaches in their disciplines. In the following Chapter, Dr Elizabeth Opara thinks through “mentoring” as a methodology for addressing the exclusion of young Black women from STEM. In her Chapter, Dr Ima Jackson recounts her involvement with Scottish Government’s consultations on FGM policy and offers “emancipatory research”, a methodology which treats input from members of the affected community as expert knowledge, for addressing the power imbalances between policymakers and marginalised communities. Dr Josephine Kwhali‘s Chapter recounts a deeply personal journey of grassroots organising to incorporate race and systemic inequality into the national curriculum of social work. Part One ends with a final chapter that provides a space for all the contributors in this section to reflect critically on each other’s experiences. 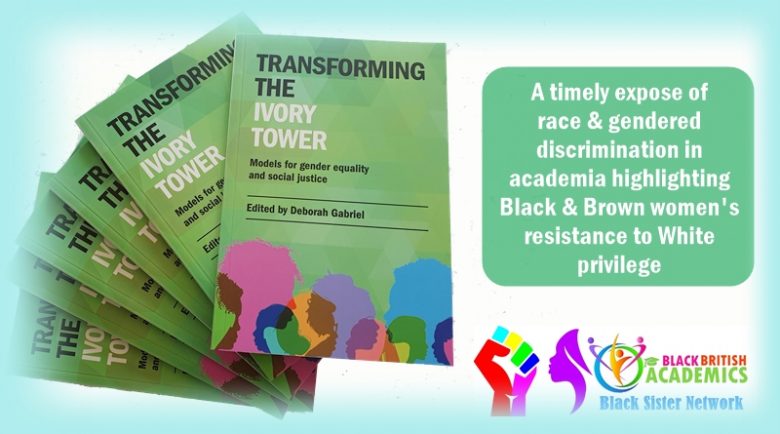 In Part Two, these experiences are the starting point for Dr. Gabriels’s conversations with other Black women in the British academy, among them Professor Shirley Ane Tate, Aisha Richards and Virginia Cumberbatch. These dialogues lead to a thought-provoking reflection about how women of colour can resist the cis-gendered heterosexual male-centric academy that has excluded their experiences, perspectives and feelings for so long.

Transforming the Ivory Tower is a radical, yet deeply practical book, using expertise gathered through experience to cultivate community and solidarity. However, it’s most radical element is Dr Gabriel’s decision to refuse the White gaze, a noteworthy departure from Inside the Ivory Tower, this book’s predecessor which she describes as a book meant to further white men and women’s understanding of race, and racism in the academy.

However, as she writes in the introduction:

“[T]his volume is primarily aimed at Black women and women of colour[…] who struggle to find a niche where they can pursue social justice and challenge inequality.”

The reason is simple enough. After she published Inside the Ivory Tower, White academics expressed their “support” to Dr Gabriel. BBC Radio, The Guardian and The Times Higher Education Guide interviewed her. Still, this did not produce the kind of change that Black academics—and people—desperately need.

The lack of racial-gender equity in British academia has been an ‘open secret’ for years. Figures from the UK government’s own Higher Education Statistics Agency (HESA) reveal that less than 1% of lecturers in the country are Black. One has to wonder why the academy has remained so homogenous this whole time.

Dr. Gabriel’s own experience within the ivory tower have taught her that most White colleagues are indifferent or, worse, openly hostile to anti-racist practices. This realisation led to the founding of Black British Academics, a network for likeminded Black and PoC academics to work towards “racial equity in higher education and the wider society.”

Transforming the Ivory Tower is this collective activism in book form—a place for Black women academics to find community, and a place for everyone else to shut up, and listen.

One notable experience that Dr. Gabriel shares is how she created a unique methodology for teaching media and public relations, by encouraging students to share their perspectives in an open and non-hierarchical learning form. Along with this, she organised opportunities to learn from and engage with media professionals and marginalised communities impacted by toxic media discourse.

Although there was the occasional disgruntled White student, Dr Gabriel remembers how this methodology had a truly “transformative” effect on her students – high attainment across the board, but among Black and PoC students in particular, and positive feedback from students, student course representatives and the students’ union. Unfortunately, when she applied for a promotion, the university refused on the grounds that Dr Gabriel does “not evidence an established research profile” and “it is not clear what outcomes/impact” she has achieved with education. Clearly, nothing has changed “since hooks (1994:204) warned that critical pedagogy ‘is not the intellectual work that most folks think is hip and cool.”

And, yet, Dr Khwali’s Chapter demonstrates the urgency of getting our media to reflect the diversity of our societies, which we have long advocated at MDI. Dr Khwali recounts how – after years of grassroots organising by Black managers and educators in the social care sector – the Central council for Education and Training in Social Work (CCETSW) officially recognised that “racism is endemic in… social services and social work education” in 1989. But, this policy hit a “brick wall” when the media began gas-lighting the legitimate concerns of Black people involved in social work, eventually getting John Major’s government to remove all mention of “race” and “systemic oppression” from CCETSW policies.

Dr Khwali’s insights go well with Dr Jackson’s emphasis on the need for policymakers to start treating input from Black communities as expert knowledge and Dr Opara’s personal recollections of waking up to systemic racism against Black women in STEM. Likewise, members of the BARC Collective emphasise that Business and Management curricula ignore race and intersectionality completely. And yet, Business and Management boasts the highest number of BAME students out of all undergraduate courses in the UK, except medicine and law.

In light of ongoing #BlackLivesMatter struggles in the US triggered by the murder of George Floyd, which we continue to cover at MDI, Transforming the Ivory Tower is an urgent and timely reminder that British institutions – academia, media and beyond – are likewise plagued by intersecting and systemic inequalities. For some readers, a head-on collision with their own privilege will make for uncomfortable reading. For others, the book will feel like home.

Transforming the Ivory Tower: Models for Gender Equality and Social Justice edited by Deborah Gabriel is available for purchase from Trentham Books (imprint of UCL IOE Press), Amazon UK and Amazon US.