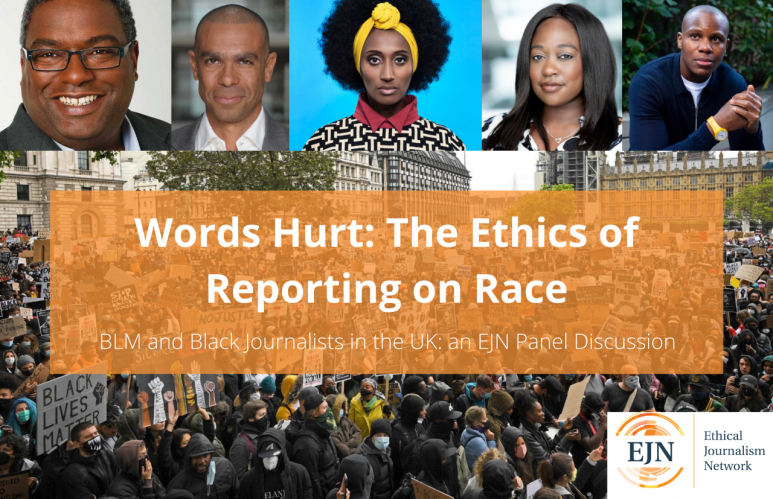 ‘Words Hurt: The Ethics of Reporting on Race’

BLM and Black journalists in the UK

“Recent BLM protests, which started with the murder of George Floyd in the US, were also a moment of reckoning for UK-based racism, which the UK has been very good at ignoring,” stated Channel 4 journalist and Football Beyond Borders trustee Keme Nzerem, introducing the panel featuring interventions from prominent Black UK-based journalists – Channel 4 reporter and winner of the Journalist of the Year and the Grand Prix at The Drum Online Media Awards 2020 Aysha Tull, BBC journalist and documentary film-maker Daniel Henry, freelance culture journalist and CEO of the Bernie Grant Arts Centre Hannah Azieb Pool, and Pat Younge, Managing Director at Cardiff Productions Limited and former Chief Creative Officer at BBC Television (2010-2014).

“I am mindful that making people surface stuff could be difficult,” Keme continued. “But how has your experience as Black journalists been?”

Over the next hour, the participants stressed that racism and racist violence touches them on a personal level. But, having a first-hand experience of racism does not threaten their objectivity, fairness and professionalism as journalists. To the contrary, it is a professional advantage since people who have experience racism are much more comfortable opening up to a well-informed, sympathetic ear. While news media are slowly waking up to the importance of representatively diverse newsrooms, Hannah Azieb Pool’s explained that culture and arts journalism remain behind.

Ayshah – who is deputising for Channel 4’s Health and Social Editor – kicked off the conversation by sharing her traumatic experience,

“Actually, I was off when the George Floyd video happened. For a long time, I couldn’t bring myself to watch this video. Then, I watched and just couldn’t stop crying, because this could be my uncle, my cousins. Some of my cousins live in Brooklyn, Orlando. One of them was arrested for a crime he didn’t commit and jailed for 10 years.”

Often, White audiences accuse Black journalists of producing one-sided content due to having these personal connections. For Ayesha, this is “insulting.” Yes, she is a Black woman. But, she also comes from a police family – her mother is “a trainer for the Metropolitan Police.” And, in the end, she is a professional journalist. Having ‘insider’ knowledge actually makes her a better judge of whether something is true or not.

Daniel agrees. In his work as a documentary filmmaker and video journalists it is important to establish rapport with people.

During London’s BLM protests in Parliament Square, “people knew that we will understand things they say. When they saw that we are Black, they thought that we will try to be fair. They were more willing to be honest with us.”

Obviously, white journalists can produce fair and balanced content about race. Unfortunately, more often than not, many who are a part of the mainstream establishment media fail to do the proper research and assume a stance that’s uninformed, at best, and hostile, at worst.

The recent use of the n* word in a BBC news report is a case in point. “The problem with BBC is they have no Black people in the editorial system,” emphasises Pat Younge.

In arts and culture media, the situation is worse.

“The idea of high and low culture is very racialised,” explains Hannah Azieb Pool. Even when Black people are allowed to publish their stories, their work is filtered through the white gaze, something we called out in a recent article.

An audience member suggested that establishing a US-style Black news network in the UK could be the answer.

For Pat Younge, it seems inappropriate to lump the UK’s Black communities – African, Caribbean, African-American – into one audience. More importantly, this would let mainstream media “off the hook” when it comes to diversity and representation. In our own work at MDI, we have long fostered and advocated the creation of media that accurately reflects the breadth of our societies and leaves no audience, however marginal, behind. As Eline Jeanne emphasises, this is especially important during a global pandemic.