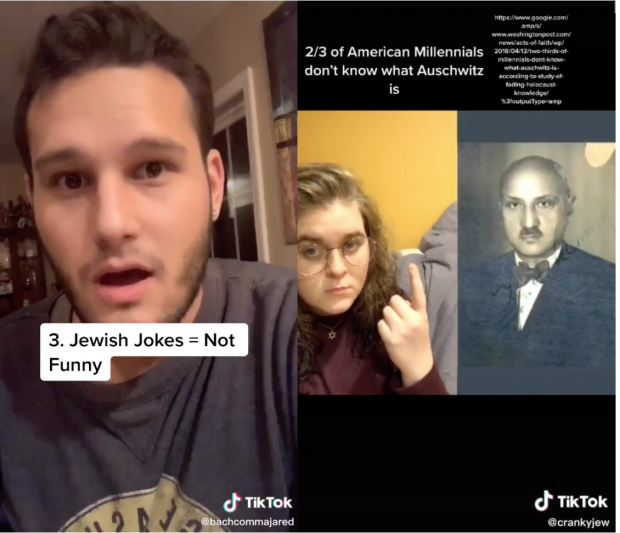 Taking Back the Hashtag: How Young People are Fighting Hate on TikTok

“Did you know that 1/3 of Americans don’t believe in the Holocaust? That 2/3 of American Millennials don’t know what Auschwitz is?”. These are the questioned posed by TikTok user @kosherramblings in response to other TikTok users claiming that “no one is forgetting the Holocaust”. Another TikTok user, @rainbowzionist, posted a video about “3 things non-Jews should know about American Jews”, explaining the heritage of Ashkenazi Jews and making it clear that Holocaust jokes are extremely offensive. This user also posts comedic content to dispel antisemitic tropes and ‘jokes’. These are just two examples of TikTok users using the platform to share educational and informative content to combat hate speech and stereotypes.

We talked to Jared Bach, creator behind @rainbowzionist, about his experiences on TikTok and the reason why he started creating content tackling antisemitism. “I was very insecure about both my LGBTQ identity and my Jewish identity for a really long time. Growing up, I faced antisemitism,” Bach shares. “I grew up in New Hampshire. There aren’t any Jews here, and if there are any gay people, none of them are out, at least in high school.” It was only when Bach went on his birthright trip, which he took with a LGBTQ group, that he found a true community: “I felt so proud to be Jewish and gay.” From then on, Bach become more involved in the community and in activism, which is how he made his way initially to Instagram and then to TikTok: “There are these journalists and these activists who are really big on other social media, but I was thinking why are we not on TikTok, this is where the young people are.” 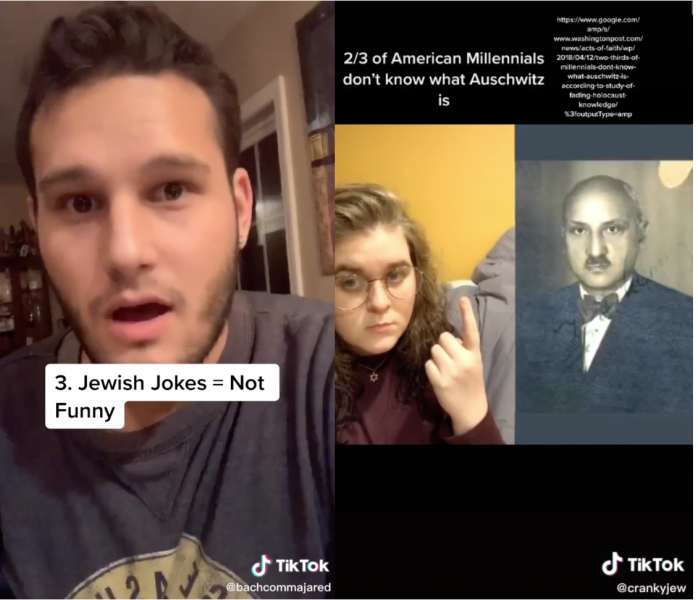 TikTok is a newer social media platform that has been rising in popularity, especially amongst young people. On the platform users can share and consume short-form mobile videos, and you can watch anything from dancing videos to cooking tutorials to comedy sketches. TikTok’s mission, in their own words, is to “inspire creativity and bring joy”, and while most of their content is in line with this mission, the platform also has a problem with hate. A recent BBC article by James Clayton talked about TikTok’s problem with the extremist and libertarian militia group Boogaloo Bois, who have been very active on the platform and who TikTok have had trouble with removing. The platform has certainly been successful; as of April 2020, TikTok has 800 million monthly active users. It is because of this rapid increase that Media Diversity Institute’s Get The Trolls Out project has been monitoring TikTok more closely to observe whether the platform is being used by some to spread hate.

Bach found that TikTok provided a community of fellow content creators: “I spent the first few months on TikTok trying to figure out what this app is, because I didn’t really understand it myself. Then I saw what people were doing with it and I was like this is the platform that I’m going to use to grow my audience. So, one of the first videos I made that was actually successful was ‘3 things you should know about American Jews’. Slowly but surely, I started to find other creators that were doing the same thing as me and I follow them and look up to them.”

Within the Get The Trolls Out project, we often focus on the hate speech prevalent on social media platforms; however, we do also come across positive and educational content. This content is often found amongst incidents of hate, as they tend to use some of the same hashtags and tags. Some users intentionally do this as a way of reclaiming hashtags used to spread hate in order to repurpose them for good. One of our monitors noted that users are often very aware that the hashtags they are using bring up hateful content, and that people search these hashtags in order to find hateful content. These well-intentioned users then use these trends to push back on hate and present helpful counternarratives.

Several different types of videos on this topic of positivity can be found on TikTok. Some users split their screen between one video of a person spreading hateful, stereotypical, or false content and in turn present their own rebuttal and reaction in response. There are also memorial or remembrance videos recognizing lives lost during the Holocaust and educating fellow users on the need to never forget this mass genocide. Some young people also use TikTok to ‘debunk’ or disprove specific statements or stereotypes; one user, @ariiiiiihob, uses this format regularly to combat antisemitism. Young people from all different backgrounds also use TikTok to share their religious and cultural background, showcasing different rituals and lifestyles.

It is here where the power of a platform like TikTok lies, according to Bach: “I think it’s important because social media platforms are not holding users accountable like they say they are and definitively they should be by making sure that hate speech and conspiracy theories don’t proliferate on their platforms. The truth of the matter is that all I have the power to do is report and see what happens after that. I do have the power to tell my story, and I think stories are very powerful and they resonate with people. I think when people see an actual Jew say something, and maybe they’ve never seen or interacted with a Jew before, they might change their opinions and they might make sure that they don’t make a mistake. So, I think it’s important to be on the platform to counter it, and to call it out.”

“Something I really am worried about is that people forget that Jews of color exist,” Bach tells us. “I don’t feel like it’s my job to speak on behalf of them but just to acknowledge that they exist and to help those who are not ‘Ashkenormative’ speak. When I talk, I try to acknowledge my shortcomings and the fact that I am Jewish and there are a lot of Jews who will see me and resonate with what I have to say and who I am, but I do not represent all Jews.”

We have covered how TikTok is being used by young people as a tool of activism and education on important topics. Feroza Aziz, for example, used to platform to raise awareness about the atrocities happening in Xinjiang, and many others have used the platform to gather more information on those currently being held in captivity there. TikTok has also been used during the coronavirus pandemic to spread vital information and dispel misinformation, and recently Black users on the platform have been fighting racist algorithms. Bach also sees the power in the platform: “Recently I haven’t been posting as many videos. I’m gathering in my mind how I want to continue this and strategize because I want it to be more organized and something that I actually take seriously. I mean, yes, I am there making silly TikTok videos, but it’s more than that for me too. People who are older than me and don’t know TikTok laugh at me for it, but I’m just like no, I’m onto something, you have to trust me.”

It is clear that TikTok is about much more than dancing and tutorials; it’s a space for young people to raise their voice and play an active role in building the world they want to create–which, for many, is one free of hate. Utilizing hateful hashtags to push back on hate is an innovative and effective tactic, and one which we hope to see continue not only on TikTok, but all social media platforms.