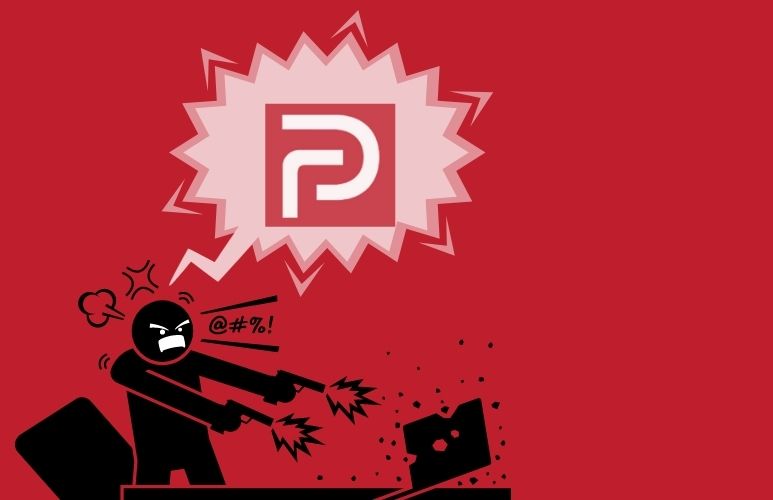 Parler: The “Unbiased” Social Media Platform of Conspiracies and Hate

After Twitter ‘censored’ Trump, the US right flocked to Parler. What’s next for the self-declared “unbiased social platform”?

After Twitter started adding warning messages to Donald Trump’s Tweets that violated its Terms of Service in May of this year, many US-based alt-right accounts quit the network, crying ‘censorship’—including but not limited to Republican Senator Ted Cruz, who decried Twitter for “shadowbanning” users and “silencing” anyone with an alternative point of view.

Did this “right-wing exodus,” as The Independent dubbed it at the time, alleviate the impact of online hate?

Media Diversity Institute has long called on Twitter to take action against toxic and hateful right-wing content on its platform, which, in many cases, openly broadcasts and inflames misogyny, racism, and anti-religious hatred –sometimes with real life consequences. One could say that Twitter’s move to label Trump’s tweets helped clean up the platform, curbing the influence of hate speech over its 330 million active users.

However, the other side of the argument cannot be ignored either; censorship rarely stops hateful speech, but instead sends it underground. This seems to be what is happening with Parler, a relatively new online network that attracts users with the idea of a platform that is “unbiased” and free of censorship in theory, and, due to the dog-whistle nature of some of these attractions, can become a breeding ground for right-wing hate and conspiracy in practice.

While Parler Founder and CEO John Matze claims that Parler is designed to be politically neutral, and open to different or contrasting views, a simple browse through Parler’s message boards shows that this is hardly the case. When I created my Parler account to start researching the platform, its algorithm immediately started showing me accounts peddling the discredited anti-Semitic QAnon conspiracy theory about the origins of COVID-19 and openly racist messages about the US elections. Most of these accounts were US-based, although when I set up my account I listed the UK as my location.

And, my experience is not a one-off glitch in Parler’s algorithms. The Independent’s Adam Smith reports being bombarded with yet-more-shocking content – “Upon signing up to the website, Parler recommended trends that were popular ‘right now’ included #trumptweetsmatter, #kukluxklan, #georgesoros and #covidiots.”

“It is unclear why Parler’s algorithm surfaced this recommendation to a new account,” he concludes.

Dr. Ed Bracho-Polanco, Lecturer in Media and Communications at the University of Westminster, agrees.

“When I see that the likes of far-right conspiracy theorist Alex Jones or xenophobic provocateur Katie Hopkins have migrated to Parler after being banned on so many media platforms because of their hate speech and misinformation antics, I can’t see how this platform can claim to be inclusive, pro-plurality and pro-diversity,” he tells Media Diversity Institute.

But just how powerful is Parler? Is it a fringe alt-right message board or is it sowing the seeds of a dangerous community that could grow in political power and prominence?

Over the summer, the Trump Campaign boosted the network’s popularity, with some unintentional help from The Wall Street Journal. After the paper ran a story about the Trump Campaign looking for alternatives to Twitter and Facebook, the platform suddenly jumped to the top-ranked iPhone app in the “news” category, cementing its political leaning solidly towards the right.

While Parler refuses to publish statistics on its user numbers, it has been estimated the platform had 2.8 million active accounts by early July – an almost 1.5 million increase, in less than 2 weeks.

So, do Twitter and Facebook need to worry about a mass exodus of users and loosing relevance to Parler?

“It depends on what kind of worry you have in mind. For example, if Parler were to start depending on advertising the way the large social media do, then, we have already seen that advertisers would sometimes put pressure on social media, particularly if there is a prospect of a breach of law,” explains Dr Eric Heinze, Professor of Law and Humanities at Queen Mary University London.

“In addition, sites such as Facebook or Twitter have had to start adapting to laws that are restrictive of hate speech, in particular, European laws and directives which can be used as a basis for legal actions against social media,” he continued, referring to legislation such as the 2008 EU Framework Decision on Combatting Racism and Xenophobia or Germany’s Network Enforcement Act, one of the strictest anti-hate speech laws in the world, which has significantly impacted how these platforms are moderated within certain countries.

“ If Parler wanted to become a major site, then, it will face the same sorts of restrictions, faced by Facebook, Twitter and other media.”

“If social and political polarisation prevails in the USA, then there’s reason to believe that a site like Parler will grow,” he says.

“With Trump in power this is likely to be the case. And it’s likely that Parler would grow from a fringe site to one not only significantly larger but also more radically right-wing.”

For now, there is no immediate danger of Parler outgrowing its fringe alt-right demographic. Its growth has all but flatlined since early July and the network is no match for Twitter’s 330 million active users, let alone Facebook’s mind-boggling 2.7 billion.

Even Ted Cruz himself is still on Twitter, despite his professed distaste for the platform. One Twitter user spared no shots in calling out Cruz’s hypocrisy.

“Yet, one shouldn’t forget that most of these platforms [Twitter, Facebook, etc] began as relatively modest start-up media or tech enterprises,” warns Dr Bracho-Polanco.

Both Dr Bracho-Polanco and Professor Heinze emphasise that we should not underestimate the danger posed by fringe alt-right social media like Gab, which played a role in radicalising the Christchurch Mosques terrorist and others.

“In fact, when comparing the two, Gab was transparent in its right-wing radicalism, whereas Parler pretends to be ‘plural’ and a ‘forum of open discussion’, which is not true. So, Parler could even gain an apparent legitimacy as a ‘neutral’, ‘balanced’ and ‘accurate’ social media that Gab never had. And this is very worrying,” Dr Bracho-Polanco points out.

At the same time, Professor Heinze questions whether social media is still an effective tool for manipulating voters in the upcoming US Presidential elections and future elections in democratic states around the world.

“What I think is different from a few years ago, from the 2016 Presidential Election in the United States or the Brexit Referendum in the UK, if you look at the electorate in a number of democracies now, there is no middle ground anyway. In other words, if you look at the Brexit Referendum there are now some people who will support Brexit no matter what happens,” he continued, speaking to the tendency for voters to cluster around two political extremes around the world.

“It doesn’t matter if our GDP collapses. If their own family loses their job. It’s like a religion. It can never be wrong,” he continued. “And, so the number of people that you have in the middle nowadays tends to be rather small. And, the margins don’t really shift very much.”

Right now, it remains difficult to predict whether Parler will become a major competitor to established social media platforms, like Facebook or Twitter. Platforms come and go, and most are replaced by new ones due to the fast-pace and highly unpredictable nature of the industry–however, the alt-right echo chamber that flocks from one “uncensored” platform to the next is what needs to tracked going forwards.